What Shakespeare Can Teach The Supreme Court 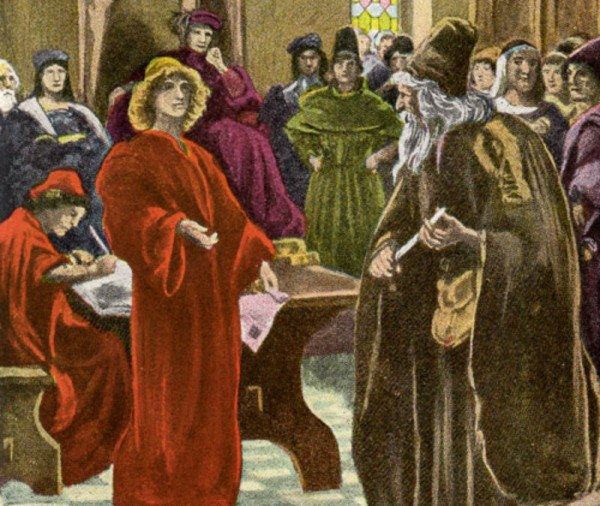 “The first thing we do, let’s kill all the lawyers.” So urges Shakespeare’s comic character Dick the Butcher, caught up in a revolution in Henry VI, Part II. Four hundred years after Shakespeare’s death on April 23, 1616, this line is still quoted often. But it would be a mistake to equate it with Shakespeare’s sentiments more generally. Shakespeare’s works are in fact unusually fascinated with the law, and raise practical, ethical, and social questions about people’s relationship to legal processes and culture. That makes them useful not just to scholars who study literature, like me, but also to law school faculty, professional lawyers, and even our bitterly divided Supreme Court justices.

In some ways, it makes sense that Shakespeare’s plays stage many legal situations. Renaissance London, like America today, was full of widespread popular interest in legal goings-on. Moreover, law and literature were far more intertwined. The Inns of Court, which were the law schools of Shakespeare’s day, were also the training grounds for all kinds of writing, and many well-known Renaissance authors—including Sir Thomas More, Walter Raleigh, and John Donne—passed through their doors. The young men at the Inns acted in scripted and improvised festive holiday performances. Members of professional acting companies performed there. Law students sometimes took roles alongside the professional actors. Some early-20th-century biographers even theorized that Shakespeare had been a law clerk or a lawyer himself.

Few today believe that to be true. But even for his era, Shakespeare—who wrote trial scenes about twice as often as his contemporaries—seems particularly attuned to legal culture. Measure for Measure troubles over the interpretation of statutes and the consequences of both rigid enforcement and laxity. Much Ado About Nothing and Othello dramatize the damages done by slander, and the ease with which persuasive evidence can be fabricated. A Midsummer Night’s Dream makes delightful comedy of marital laws. King Lear, Richard II, and As You Like It explore and critique laws of property ownership and inheritance. The Winter’s Tale, Macbeth, and the three Henry VI plays dramatize the era’s pervasive fear of treason.

Shakespeare’s ability to probe juridical issues by putting imaginary persons in legal situations has been a part of the U.S. legal system for a century now. The early-20th-century law and literature movement incorporated history and fiction into the law school curriculum to help re-humanize the profession. Today, many well-known authors appear in law school syllabuses. Unsurprisingly, though, Shakespeare occupies the central place. And during the past several decades, literary scholars also have brought more attention not only to the presence of law in the plays but also to the ways literature shapes legal ideas.

What, for instance, can Shakespeare tell us about our Supreme Court’s division over how to interpret the Constitution? The Merchant of Venice offers one possibility. Shylock, a Jewish moneylender in 16th-century Venice, has a notarized written contract with Antonio, a wealthy merchant. The terms are admittedly odd—if Antonio fails to repay Shylock within three months, Shylock may take a pound of flesh from anywhere he chooses on Antonio’s body. When Antonio defaults, the characters battle in court over the meaning and authority of the contract. Antonio’s lawyer, Portia (a woman disguised as a male lawyer), strives to find some loophole in the contract that will prevent Shylock from taking his pound of flesh. Finally, after rereading the document, Portia grants Shylock what he was asking for—rigid interpretation. Since there is “no jot of blood” expressly mentioned, Shylock can take Antonio’s flesh but not his blood—which is, of course, impossible. The argument anticipates innumerable legal disputes. Here is our modern American debate about the Constitution: What it means and includes “literally” is not at all self-evident, as centuries of interpretation show us.

The play’s conclusion also anticipates another issue that came before the Supreme Court earlier this week: the status of non-citizens. Before Shylock is allowed to leave the court, Portia cites a statute that indicts any “alien” who attempts harm to a citizen of Venice: He may lose his property and even his life. Shylock’s status makes him vulnerable to extremes of punishment not inflicted on citizens of Venice. Though he is allowed to live, he is required to forfeit his goods and renounce his religion. The scene requires audiences and readers to confront the brutal, inequitable, but “legal” treatment of the non-citizen.

Ultimately, Shakespeare’s works are knowledgeable about law but skeptical about lawyers and legal proceedings, often depicting them as flawed, corrupt, or simply incapable of addressing at the most significant level the deep desire of a society for justice. Nonetheless, justices still invoke his works as though their legal concerns were unambiguous. Sometimes, they’ll cite Shakespeare to add rhetorical flair and finesse to a ruling, and sometimes to bolster a decision by referring to works that have cultural authority. But sometimes, significantly, the quotations are doing central judicial work—as when the late Justice Antonin Scalia quoted Richard II while defending the Sixth Amendment right of the accused to confront witnesses against him: “Then call them to our presence—fact to face, and frowning brow to brow, ourselves will hear the accuser and the accused freely speak.” Or when, in a dissent in an Eighth Amendment case on the meaning of “fines,” former Justice Sandra Day O’Connor cited Prince Escalus in Romeo and Juliet: “I have an interest in your hate’s proceeding. / My blood for your rude brawls doth lie a-bleeding; / But I’ll amerce you with so strong a fine. / Then you shall all repent the loss of mine.”

In these cases, and many others, Shakespeare becomes not only a writer about law but also a voice within it. Shakespeare’s plays don’t just reflect legal culture but also help to shape it. Meanwhile, legal and literary studies continue to bring to light new insights into the legal role of the Shakespeare canon—as an antique repository of early modern English law and a modern necessity through which we continue to imagine and reimagine a just society.

Karen Cunningham teaches Shakespeare and Renaissance drama at UCLA. Her most recent book is the co-edited collection The Law in Shakespeare (2010).