Assistant U.S. Attorney Ben Barron on What Law & Order Gets Wrong About His Work 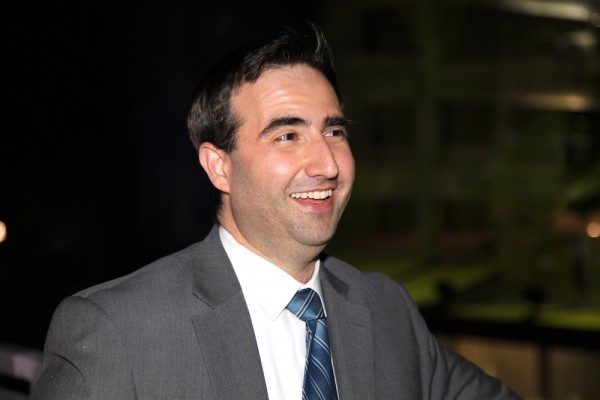 Ben Barron is an assistant United States attorney in Los Angeles and deputy chief of the office’s Organized Crime and Drug Enforcement Task Force. Before participating in the Zócalo/UCLA panel “Can Anything Stop America’s Opioid Addiction?”, he talked in the Zócalo green room about what Law & Order gets wrong about his work and why he wishes he’d learned French instead of German.

Q: What do you do to decompress?
A: Play the guitar. Play with my son, who’s the cutest baby in the world—I think it’s certified. Read. And hang out with my wife. It can’t get better than that.

Q: What’s your favorite song to play on guitar?
A: Dust in the Wind was the song I was on a mission to learn, and I finally learned it. I play Pink Floyd, I play Bach, you name it. It’s a good way to vent.

Q: How did you get into trouble as a kid?
A: I used to be, like, one of the bad kids. I would get into fights. And then my best friend got expelled, and thank God it wasn’t me, and I didn’t have my partner in crime anymore, so I gave that up.

Q: If you didn’t live in Los Angeles, where would you be?
A: Portland, Oregon. Easy.

Q: What food are you most likely to binge eat?
A: Pizza. Only when paired with beer.

Q: What do TV procedurals get wrong about the work you do?
A: TV procedurals like Law & Order are actually really good at capturing the work of a state prosecutor. As a federal prosecutor, it’s more like a chess game. We do two years of investigation and tee it all up for trial. It’s a much more advanced, strategizing, intellectual pursuit.

Q: What’s the last great book you read?
A: I read [my fellow panelist] Sam Quinones’ book Dreamland, which was amazing.

Q: What inspires you?
A: People working hard, people who want to be good at their jobs, people who care about serving other people, people who aren’t afraid of vulnerability in their emotions but can also be strong when the moment calls for it.

Q: What movie are you most likely to quote?
A: The Big Lebowski.

Q: If you could learn another language, which would you choose?
A: French, just because everything you say in French sounds good. I learned German when I was in college, which is probably the polar opposite language. Big mistake.

Q: What’s your favorite under-the-radar spot in L.A.?
A: I just went to Velveteria, the black velvet art museum, which was surprisingly amazing.