For a UCLA Biologist, Groundhog Day Celebrates Science, Not Superstition 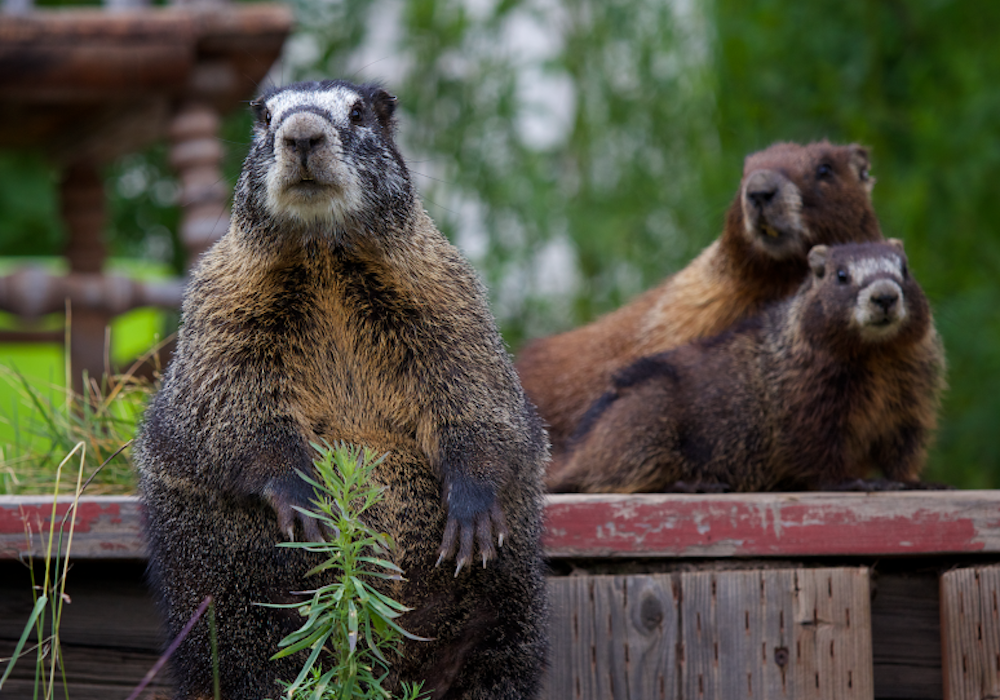 A family of yellow-bellied marmots—close relatives of the groundhog—at the Rocky Mountain Biological Laboratory in Crested Butte, Colorado. Courtesy of Ben Blonder.

I am a scientist who loves Groundhog Day, that least scientific of holidays. Every February, as Punxsutawney Phil shakes the dust off his coat, emerges from his burrow, glances at his shadow (or not) and allegedly prognosticates winter’s end, I gather a group of professors, graduate students, and other assorted science geeks at my UCLA lab to nibble, drink, schmooze, and revel in ground-hoggery in all its magnificent splendor.

I study the behavior, ecology, and evolution of groundhogs and the 14 other species of marmots—large, charismatic ground squirrels that live throughout the northern hemisphere. I realize that these rodents can’t tell us when seasons will change. I know that the whole idea of celebrating a mid-winter festival in Los Angeles’s usually balmy clime also makes little or no sense. I know that hanging out with a taxidermied animal I stuffed myself might seem a bit quirky for a tenured professor.

But Groundhog Day—and its inherent absurdity—also serves as a reminder to me and my colleagues of why we do what we do. The United States has prospered in no small part because of our commitment to supporting science and technological innovation. With each new advance—from the automobile to the polio vaccine to computers to space travel—we have reinvented ourselves and the world around us. Scientific discovery is at the core of America’s success. Conversely, an Internet meme a few years ago wondered, “Why is that only in America do we accept weather prognostication from a rodent but deny climate change from a scientist?” But for my colleagues and me, groundhogs are symbols of science, not superstition.

At my annual lab celebration, posters of groundhogs and plush stuffed groundhogs—not to mention a glittering Swarovski crystal specimen, given to me by UCLA’s Department of Ecology and Evolutionary Biology as thanks for years of service as department chair—add to the ambiance. Groundhog-themed comics festoon the lab walls. “Two Buck Chuck,” our stuffed adolescent groundhog, presides over the festivities perched in one corner. One fall long ago, when I was doing my postdoctoral research, I found him dead on the side of the road and threw him into the freezer. My wife Janice and I had to wait to stuff him until Christmas break, when the smell associated with thawing and skinning him would be less offensive to our lab mates.

We’ve been holding our Groundhog Day fête since 2001. America has been at it far longer than that. Groundhog Day was originally a reimagining of Candlemas Day, a Catholic mid-winter festival which itself had roots in a pagan celebration. Europeans observing Candlemas tracked hibernating hedgehogs to predict when winter would end. When the Pennsylvania Dutch came to our shores, they too looked for a hibernating mammal that might help them monitor the weather.

Woodchucks, also known as groundhogs, were native and seemed to fit the bill: Males popped up out of their burrows each February, probably checking things out and deciding when they should start waking up females to mate. The new Americans took notice, and Groundhog Day was born.

Since 2001, I have run a long-term study, initiated 55 years ago by my mentor Ken Armitage, now an emeritus professor at the University of Kansas. Ken is the world authority on marmots, and is credited with emphasizing the importance of their annual cycle, which varies by location, in explaining why marmot sociality varies. It was Ken, actually, who first came up with the idea of celebrating Groundhog Day. He used to host the members of his lab at his house, serve “ground hog” (a.k.a. sausage), and recite marmot poetry.

The study follows individually-marked yellow-bellied marmots at the Rocky Mountain Biological Laboratory in Gothic, Colorado. The value of the work is rooted in its longevity—it’s one of the longest-running studies of its kind and an important tool for studying evolution in action. The animals are now emerging about a month earlier in the spring than they did 30 or 40 years ago.

Understanding how individuals respond to environmental change is essential if we want to predict how animals will react to global warming and other human-driven habitat shifts.

Science is what I do. I’m thrilled and inspired by being able to spend my days uncovering the secrets that hide in plain sight around us, and to use my marmot studies to train students to think critically and objectively. Our grand American experiment has prospered when it has the best possible information—and I know that the scientific method is a very efficient process for revealing nature’s truths. This is the spirit in which I commemorate Groundhog Day—celebrating America’s devotion to science, not just superstition.

Daniel T. Blumstein is a professor at the UCLA Department of Ecology and Evolutionary Biology and the UCLA Institute of the Environment and Sustainability. His seventh book, Ecotourism’s Promise and Peril: A Biological Evaluation, will be published by Springer in 2018.