From the Wreckage of the ’92 Riots, a More Diverse, Civic-Minded Los Angeles Rises 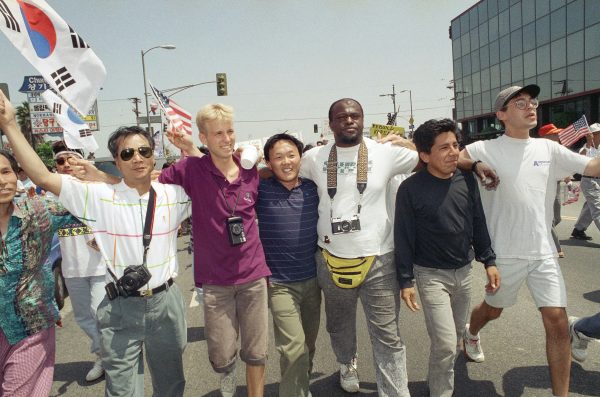 Koreans, African-Americans, Latinos, and whites join in a peace march through the Koreatown area of Los Angeles, Saturday, May 2, 1992. The march, estimated at more than 25,000 people, is calling for peace and unity in the city. Photo by David Longstreath/Associated Press.

Luxury condominiums compete with foreign banks on the new skyline of Koreatown. On a Saturday night, 20-somethings crowd the sidewalks, huddling around food trucks, circling in and out of karaoke bars, biryani places, barbecue joints, and a high-rise driving range. This same neighborhood, and other swathes of Los Angeles, seemed doomed 25 years ago when more than 2,000 Korean business were damaged or destroyed during the three days of civil unrest that followed the infamous verdict in the prosecution of police officers who beat Rodney King.

The distance L.A. has traveled between then and now marks a journey that has landed this city in a place very much of its own making. There have been strides and setbacks, and not everyone will agree about what constitutes progress or why some big problems remain unresolved. But, if this is a different city— we would say a better city—than the one that burned in 1992, the explanation lies in decisions Angelenos made about how they govern themselves.

First though, the L.A. story of the past quarter century has to begin with hitting bottom after 1992. In 1994, the Northridge earthquake struck, killing 57 people, injuring thousands more, and costing billions of dollars in property damage. That same year, California voters, including a majority in Los Angeles County, backed the Prop 187 ballot initiative, which prohibited unauthorized individuals from using state-run public services. The isolation, anger, and racial tensions of the 1990s continued with police scandals that eroded trust.

But those scandals also produced reform efforts that, haltingly, created a new model of community-centered law enforcement. And then, in the early 2000s Los Angeles began moving toward a shared destiny, as the region’s economics and demographics shifted.

In 1992, the non-Hispanic white population accounted for 41 percent of Los Angeles County, according to census data; that population now composes only 28 percent of Los Angeles County residents. That happened because whites left, and the non-white population grew not with immigrants but with their children. The flow of new immigrants to Los Angeles peaked in the 1990s as other destinations offered lower living expenses and better job opportunities. The big numbers already here largely stayed in place and made families. Children of immigrants now account for more than one in five residents, the highest share of any major metro.

Now coming of age, this huge generation of young people has grown up navigating cultural and racial differences. According to a 2013 study by the Pew Research Center, second-generation Latinos and Asian Americans are much more likely than members of their parents’ generation to have diverse friends, feel comfortable with interracial marriage, and get along with people of other groups. By necessity, that has become the default attitude in L.A.’s school corridors and playgrounds. The remains of a commercial building smolder, as another building burns out of control, in Los Angeles, early on the morning of April 30, 1992, after riots broke out in response to the verdict in the Rodney King beating trial. Photo by Douglas C. Pizac/Associated Press.

Of course, a whole lot of young people, members of minority groups and growing up without many advantages, could have spelled trouble in the streets. But, as this second generation came of age, crime dropped—a lot. The violent crime rate was more than six times higher at the time of the unrest than it is today. As crime declined and this new home-grown population of cosmopolitans matured, Angelenos began making investments in their collective future.

Over the past decade and a half, voters repeatedly have endorsed tax increases to expand affordable housing, homeless services, school construction, and transit development in the region. These investments benefit everyone in the region, not just specific neighborhoods or populations. The success of these recent ballot measures, which often required support from supermajorities of voters, exemplifies Angelenos’ willingness to take responsibility for the common good.

Los Angeles also has repeatedly chosen to invest significant funds in the city’s arts and cultural resources over the past 25 years, enabling us to examine our history, heal past trauma and racial divides, and build a shared and inclusive cultural identity. Annual income for Los Angeles County arts-related nonprofits is estimated at $2.2 billion, and the arts and creative industries account for nearly 1 out of 6 jobs in Los Angeles County—a significant part of our economy.

These investments allow organizations like the Los Angeles Philharmonic and the Los Angeles County Museum of Art to defy national trends by increasing audiences and revenue, and to provide a wide range of diverse communities with performances and educational programs. Meanwhile, small theaters, studio spaces, and storefront galleries have become focal points of neighborhood regeneration. Simply put, the arts increase social capital and provide a rich cultural landscape in which civic vitality can thrive.

Among the most encouraging developments are moments of civil dialogue that have brought diverse populations together around shared objectives, and there is a valuable example near the burn zone of 1992.

Consider the Central Los Angeles Promise Zone, one of the first three designated zones (the others were in Philadelphia and San Antonio) under President Obama’s signature anti-poverty initiative that provides preferential status and technical assistance on federal grant applications. The Central Los Angeles Promise Zone encompasses Hollywood, East Los Angeles, Pico Union, Westlake, and, perhaps most significantly, Koreatown. These neighborhoods are collectively home to 165,000 people, 35 percent of whom live in poverty.

Like many urban neighborhoods on the edge of a central business district, this area just west of Downtown Los Angeles had seen slow deterioration of its housing stock, a loss of jobs, weak transportation infrastructure, and growing homelessness in the years leading up to the civil unrest. After much of Koreatown was destroyed in the civil unrest, representatives of many economic interests and a variety of ethnic communities found common cause in the process of drafting redevelopment plans based on public-private partnerships, such as the Wilshire Center/Koreatown Redevelopment Project Area.

Now, more than two decades later, the Central Los Angeles Promise Zone is bringing the community together again to identify shared goals and desired outcomes around good jobs, safe streets, and improved educational opportunities for young people in the community. This process alone has not directly solved problems, but proposed solutions have a much better chance of becoming real when they are based on a deliberative process of community engagement and collective goal setting.

Lastly, Los Angeles has chosen policies that treat the undocumented population as part of the civic family. And they are, literally, a big part. One of every 10 adults in Los Angeles County, and the parents of one of every six kids in the public schools, are undocumented immigrants: one million people, the largest concentration in the country. The region’s commitment to including the undocumented in plans for the future goes way beyond “don’t ask, don’t tell” policies in law enforcement. Angelenos, often in concert with the state government, have helped ensure that unauthorized immigrants have access to health care, public education, drivers’ licenses, and community policing that unambiguously aims at protecting them and their neighbors.

They are part of us. That realization developed slowly, and it applies not just to the undocumented. Los Angeles was a city of contested spaces and tribal rivalries 25 years ago. It’s not that now.

Roberto Suro and Gary Painter are professors in the Sol Price School of Public Policy at the University of Southern California, which is co-hosting a two-day conference April 27-28 that will reflect on the 25 years since the 1992 civil unrest and look at the new community revitalization opportunities facing Los Angeles. Visit socialinnovation.usc.edu for more information.