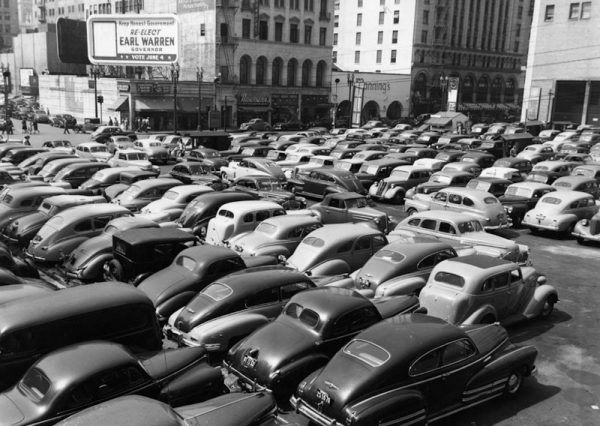 In June, Californians should be marking the 70th anniversary of the Collier-Burns Act. But you probably have never heard of it, even though Collier-Burns likely has an everyday impact on your life.

The Collier-Burns Act of 1947 created the California freeway system by substantially raising the gasoline and other motor vehicle taxes and earmarking the resulting revenues for highway construction. If you drive on freeways, you are utilizing a legacy of Collier-Burns.

State Senator Randolph Collier and Assemblyman Michael Burns both played a part in enacting the law and received the titular credit for it. But the Act would never have been passed without the leadership of then-Governor Earl Warren.

Warren is well remembered, but not as the Father of the California Freeways. His career as a California state politician is largely eclipsed by his national service as Chief Justice of the U.S. Supreme Court and the landmark decisions of the “Warren Court” in desegregation, criminal justice, and political reform. To the extent that any governor is given credit for the California freeways nowadays, it is likely to be Pat Brown, our current governor’s dad.

But the true origins of Collier-Burns are worth knowing, as they bear on today’s difficulties with building and maintaining essential infrastructure.

The story of Collier-Burns takes us to the period immediately after World War II. California’s population had grown at a rapid pace in the 1940s, from 6.9 million in the 1940 census to 10.6 million in 1950. The state’s roads hadn’t kept up with growth, given the scarce tax receipts during the Great Depression and the diversion of public resources to the war effort.

Southern California in particular already had a reputation for heavy reliance on the automobile before World War II, but neither the north nor the south had a road system that matched their car-oriented reputation. The absence of modern roads in California in the 1940s wasn’t due to lack of planning. There were plans gathering dust in drawers for a system of limited access highways with maps that look similar to what we have today. The problem in implementing these grand plans was the cost of building roads. You could float bonds to stretch out the expense. But eventually, the bonds had to be paid off. And apart from debt service, roads, once built, needed continuous funding for maintenance and repair.

The state financed major roads as one-off ventures; the Arroyo Seco Parkway, now known as the Pasadena Freeway, was partly financed by the federal government as a Depression-era jobs creation project and completed in 1940. But such financing was not enough to develop a system of roads.

Governor Warren ran for re-election to a second term in 1946. Under the state’s then-existing cross-filing system, he won the nominations of both the Republican and Democratic parties in the primary, although he was a Republican. As the nominee of the two major parties, he had only token opposition in the general election. Armed with an overwhelming victory and evident popularity, he proposed a hike in the gas tax and other vehicle fees, with the money to be placed in a trust fund and earmarked for modern road construction.

Gov. Warren faced strong opposition to his highway plan. Trucking companies wanted the revenue to come mainly from the gasoline tax, not a tax on the diesel fuel that trucks used. Utility companies wanted reimbursement for the cost of shifting the wires that were in the paths of the new roads. There was a north vs. south political split in the legislature and regional suspicion over how the proposed revenue bounty for roads would be divided. And there was a similar urban vs. rural divide.

These legislative frictions were important barriers to getting a bill passed. But the chief opposition was from oil companies that didn’t want a gasoline tax hike to be the major funding source. There were various communications from Warren supporters to oil executives trying to explain that more roads would mean more driving, more cars, and therefore more gasoline sales. But this simple and obvious proposition was strongly resisted by the oil lobby.

The result was months of conflict and jockeying in the legislature and a near-death experience for the Collier-Burns Act. Warren, rather than play a defensive game, went on the radio denouncing the oil companies as ruthless special interests. One particularly damning charge made by Warren was that California’s obsolete roads caused accidents and that those resisting passage of Collier-Burns would therefore have blood on their hands if their efforts succeeded in killing the bill.

Compromises reshaped the bill as it moved through the legislature. Warren’s proposed two-cent tax hike was reduced to 1.5 cents. One reluctant legislator was persuaded to vote for the bill in exchange for a deal on pet food labeling. In the end, Collier-Burns was enacted in late June 1947. Gov. Warren proclaimed that the new law would keep California “among the most progressive and forward-looking states in the Union.”

However, the influence of Collier-Burns ultimately extended beyond California to other states. When the Eisenhower administration took office in 1953, it envisioned a new federal road system. Originally, the administration favored toll roads as the basis of the proposed interstate system. But the California model was already influential. By the 1950s, California was the second most-populous state (behind only New York) and had a large and powerful congressional delegation. Vice President Richard Nixon was a Californian, as was William Knowland, the Republican minority leader in the U.S. Senate. As House and Senate committees considered the Eisenhower proposal, experts from California were brought in to testify.

Eventually, the toll road idea was dropped, although a provision accommodated those Eastern states that already had built toll roads. The federal bill became a larger projection of the California approach, i.e., gas tax and trust fund, and was enacted by Congress in 1956. For California, the federal bill became a matching source of money that accelerated and expanded what the state was already building or planned to build. Pat Brown was elected governor in 1958, just in time to inherit Earl Warren’s legacy in highway construction.

Of course, the same California freeways that were seen 70 years ago as a model for the nation are now heavily congested and in need of repair. Critics say the freeways encourage urban sprawl, displace public transit, and cause environmental damage. Nonetheless, Gov. Jerry Brown recently pushed a bill through the legislature to raise the gas tax and other vehicle fees for road repair and other transportation purposes. Along the way, he used some tactics to obtain the necessary votes that Earl Warren would have found familiar.

From an historical perspective, Collier-Burns was more than a state highway bill. It marked California’s entrance as a major influence in the American polity. California became seen as a model of public policy and planning. It is only natural that, after 70 years, our views regarding the freeway system that resulted from Collier-Burns would have changed. But at a time when California’s politics seem to be moving in the opposite direction from much of the rest of the country, it’s nice to look back to an era when what California was doing was what the other states hoped to emulate.

Daniel J.B. Mitchell is professor-emeritus at UCLA Anderson School of Management and at UCLA Luskin School of Public Affairs.