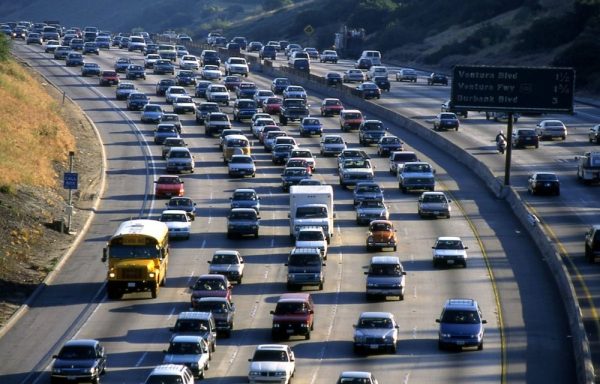 In 1865, British economist William Stanley Jevons wrote an influential essay entitled “The Coal Question.” Today his insights are interesting to me not as they relate to coal, but rather as they relate to me sitting in the legendary traffic of the 405 freeway in Los Angeles during my morning commute.

Jevons’ observations on coal also have something to say about the Oshiya (train pushers) who squeeze every last person onto subway cars in Tokyo, and about Governor Andrew Cuomo’s recent declaration of a transit emergency for New York’s famed subway system.

Jevons wrote that an increase in the efficiency of coal production would stimulate increased demand for coal. Jevons’ reasoning was that more efficient coal production would lead to lower prices. And Economics 101 tells us that lower prices lead to more consumption—perhaps, in this case, creating so much more demand that it would outstrip the capacity to produce coal.

In such a scenario, the production of coal might be increased to meet the heightened demand, but that would require marginal mines to be brought into operation. Given that these mines would be less efficient, prices necessarily would rise to cover the additional cost. Prices would not initially increase back to their old levels, but as the population grew it would generate additional demand for coal and such a rebound in prices might well occur.

These same insights about coal are applicable to mass transportation systems—particularly freeways. Last February, the Dutch firm TomTom, which produces traffic, navigation, and mapping products, drew on the brave new world of big data to release their 2016 index of traffic congestion. Our region, the Pacific Rim, was the clear “winner”—or, I should say, the clear loser. Seven of the top 10 congested cities are on the Pacific Rim and Los Angeles leads the list of American cities.

Anyone who travels the cities around the rim can attest to snarled traffic in Jakarta, Beijing, Seattle, and Los Angeles. The question “What are we going to do about traffic?” is a constant source of conversation, particularly here in L.A., and it is pervasive enough to have given rise to the parody “The Californians” on Saturday Night Live.

There would seem to be two ways to ease traffic congestion: build more capacity, or reduce the number of people who use the existing capacity. Yet, just as with Jevons’ coal demand, traffic seems to expand to meet whatever capacity exists. And this is not just a Los Angeles or Beijing problem. In 1990, British transportation analyst Martin Mogridge observed it as a more general characteristic of highways, and it is now enshrined in transportation planning circles as the “Lewis-Mogridge Position.”

Why is it that cities cannot build enough capacity to solve the problem? The answer may lie in two factors: the price of housing, and the pricing of congestion.

Let’s start with the price of housing. The purchase or rental price of a home reflects the sum value of many characteristics of that home. In this column, I have often written about how proximity to natural amenities, such as beaches and mountains, makes housing more expensive. But proximity to work also is an important consideration. The closer to work, the shorter the commute time, and the more valuable will be the home.

But it is commuting time and not linear distance that matters most. Consequently, when you increase the capacity of transportation infrastructure, you get shorter commute times—at least initially. And that makes homes close to the new infrastructure initially more attractive.

Intensifying congestion, however, will affect a home’s price. At 3 a.m., the opportunity cost of traveling the freeway to a destination is practically zero. It takes a little time, and that is a cost, but not much. But in rush hour when freeway speeds are slow, the opportunity cost increases with the additional time spent sitting in your car listening to The Grateful Dead on the radio. The more cars there are (higher demand), the more time is required to crawl through rush hour (the higher cost).

Here is where Jevons’ idea comes in. When there is not much congestion, one can live further away from work where home prices are lower, and still arrive at work on time without spending too much more time commuting. Consequently, building another lane on the freeway opens up more residential options.

So adding capacity makes two big things happen. First, there is an increased demand for the housing that is now within driving distance to work; and second, more people will use the freeways to get to work. This leads to more freeway congestion and ultimately longer commute times for everyone. Empirically we see this happening quite fast, and eventually the new lane has done nothing to ease congestion.

There are a number of solutions to this. One is to build mass transit and induce people to use it. This is the favored solution of urban planners today because mass transit is a more efficient means of transportation. It can carry many more people per dollar spent on building, maintaining, and operating the transit than the highways can.

But with mass transit, as with highways, the same principles of capacity and demand apply. When Japan began building the Tokaido Shinkansen (high-speed rail) in 1959, it was, in part, intended to ease the burden of commuting in densely packed Tokyo. Today, anyone who rides the rail line, especially in rush hour, knows what a sardine feels like when packed into a flat tin can. In this case the cost is not time, but the discomfort of cheek-to-jowl train ridership.

Another solution to the problem of increased capacity driving demand is to convert lanes on the freeways to toll lanes. This is a favorite of economists because people who value time more will pay a premium to avoid the costs of congestion. Consequently, the scarce resource—road space—will be rationed according to its relative value to consumers. Of course, it is not only the value of time that matters in the decision; income—the ability to pay tolls—does as well. Adding a toll lane allows rich people to drive fast and reduces the capacity on the freeway for everyone else. And that raises issues of equity for infrastructure built with tax dollars.

The other problem with toll lanes is that there is an alternative to either paying for the less congested toll lane, or driving in the now more congested free lanes: driving on surface streets. With navigation apps such as Waze, drivers can take the nearest off-ramp and motor through residential neighborhoods. When they do that, they expose residential neighborhoods to the congestion, noise, and pollution that the freeways were originally built to eliminate.

Moreover, a 2001 article by Ingo Hansen of Delft University of Technology suggests that transportation analysis of toll roads gets it all wrong. His research indicates that when fed-up freeway commuters start taking app-directed shortcuts through residential areas, the local roads quickly become clogged, hampering residents’ ability to make short trips or run errands. These residents are now competing with longer-distance drivers, and so they, too, pay a cost in congestion, safety, and pollution. Indeed, this Waze phenomenon induced L.A. City Councilman Paul Krekorian in 2015 to suggest new government regulations for local street usage.

So, toll roads don’t seem to be a complete answer either. Recognizing this, Mexico City, Beijing, and other cities have followed the example of Julius Caesar, who in 1st Century BCE Rome banned chariots from the center city during the day, except for two hours in the morning and two hours in the late afternoon. Romans responded by moving their trips to the allowable four hours each day—thereby creating epic chariot jams.

Today Singapore uses a combination of policies to limit the number of cars on the roads. First there is a quota system that limits the number of cars on the island. Second, those who have cars are charged for driving them through a sophisticated system that measures where they are and when they are driving. This system will be improved shortly with the installation of GPS monitors in each car.

These are useful alternatives. But let’s remember our friend Jevons. Policies to limit traffic might not do much, even with the best of planning, so long as the city we live in is attractive to a lot of people. An oft-heard refrain about my hometown is: “I would love to live in L.A. but couldn’t stand the traffic.” If you make traffic better, more people would move here, and traffic would get worse. Congestion costs ration limited space and this reduces the number of people moving in.

All we can do for now is stay ahead of the game in the best way possible. Provide incentives for people to use the least-used modes of transportation and plan for the increases in population that will invariably happen to cities that are attractive to people from far-flung lands. Perhaps the advent of self-driving autos will provide the bandwidth to break the traffic jam for good, but perhaps not. What will be required is to engage transportation planning with housing planning in a way that recognizes the close tie between the cost of congestion and the price of housing.

On the bright side, if you are late for something in one of the Pacific Rim’s notoriously congested cities, simply saying “Sorry, traffic!” is sufficient to get you by.