The Slave Gardener Who Turned the Pecan Into a Cash Crop 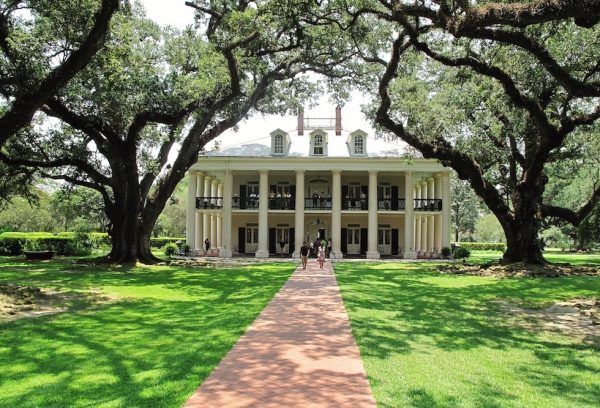 Pecan trees, armored with scaly, gray bark and waving their green leaves in the breeze, grow in neat, uniform rows upon the Southern U.S. landscape and yield more than 300 million pounds of thumb-sized, plump, brown nuts every year. Native to the United States, they’ve become our most successful home-grown tree nut crop. Hazelnuts originated here too, but they come from a shrub, which can be trained into a tree. Almonds come from Asia. Peanuts, which aren’t actually nuts, hail from South America.

Most Americans know and love pecans as the signature ingredient in a classic Thanksgiving pie, served with cranberries, sweet potatoes, turkey, and dressing. Few of us give much thought to the nut’s unique history.

The domestication of the pecan was a relatively recent event, accomplished during the 19th century in large part by one man: a gardener named Antoine, who toiled in slavery on a Louisiana plantation. As is often the case with enslaved people, we don’t know much about him. But it is certain that he was tremendously skilled. Antoine was the first person to figure out how to propagate individual pecan trees—creating offspring that shared desirable characteristics with a parent—paving the way for the uniformity necessary to cultivate a commercial crop.

For centuries, pecans had been a dietary staple of the Native American tribes who lived among the forested lowlands along the Mississippi River and its tributaries, from Illinois down to the Gulf Coast, into Eastern Texas and Mexico. Carried to the Eastern Seaboard by fur traders from the frontier, pecan kernels generated a great amount of interest among early explorers and America’s Founding Fathers. George Washington planted pecans at Mount Vernon in 1775. Thomas Jefferson planted them at Monticello in the 1790s. Washington was known to carry them in his coat pockets as a snack.

But growing productive pecan trees wasn’t easy. The earliest pioneers of pecan domestication were settlers along the Mississippi who experimented by planting nuts from their favorite trees. It took the trees a long time to bear nuts compared to most fruit trees. Early planters soon grew frustrated, too, when they hit another roadblock. Like many fruit and nut trees, when left to nature’s devices to multiply, no two pecan trees end up alike. You could plant 1,000 nuts from a single tree and every one of them might produce another tree that varies from its parents and siblings in a multitude of ways—leaf shape; branching pattern; size, quality, consistency, and timing of its nut production; and so on.

Would-be pecan farmers did just that, planting entire orchards of nuts from a favored tree, and wound up shocked when the nuts from the resulting trees were quite different. It didn’t take long for them to start looking for solutions.

One of the first breakthroughs came from the French explorer and botanist Andre Michaux, who observed stands of wild pecans managed by Native Americans near Kaskaskia, Illinois in 1819. Michaux was convinced of the value of the pecan nut and believed the pecan might be more rapidly adapted to commercial production in the East if its twigs were grafted onto black walnut trunks, which he falsely believed grew more quickly than pecans did. Pecans, which are native to the U.S., grow in many shapes and sizes. Photo courtesy of Lenny Wells.

Michaux’s black walnut idea didn’t go anywhere, but his observation that joining two separate plants together could make pecan farming more profitable was a crucial one. For any crop to be successful, it must be consistent in quality and yield, and one way to achieve uniformity is through grafting. Even in ancient times farmers had figured out that joining plant tissues from two species together—one that took root and grew well in a particular region, for example, and another that produced dependably desirable flowers and fruit—allowed them to propagate entire vineyards, fields, or orchards of a single variety.

In 19th-century America, farmers achieved great success using grafting to produce apples and peaches but they hadn’t yet made the leap with pecans. The first person known to attempt propagating pecans was Dr. Abner Landrum, who joined small patches of pecan buds to young hickory trees in Edgefield, South Carolina in 1822. Some of his attempts were successful, but there was no viable market in the area to support his efforts. As a result, they were largely dismissed and quickly forgotten.

It took a larger commercial center—New Orleans—to propel the development of the pecan as a cash crop. Oak Alley Plantation, originally named Bon Sejour, was established in 1837 by Jacques Telesphore Roman, and is still recognized today by its plantation house, lying at the terminus of two rows of massive, aged live oak trees along the old River Road, southwest of Louisiana’s Lake Pontchartrain.

Oak Alley’s neighbor across the Mississippi River, the Anita Plantation, was home to a verdant pecan tree that regularly produced large, thin-shelled nuts. Sometime in the early 1840s, a local pecan enthusiast, Dr. A.E. Colomb, attempted to graft twigs from this tree onto other pecan trees. Unsuccessful, he grew exasperated, and eventually crossed the river to consult with J.T. Roman. Colomb had heard there was a talented gardener at Oak Alley.

Roman’s records show that he owned 113 slaves, 93 of whom labored in the fields. One of these workers was a 38-year-old man known only as Antoine. Roman’s ledger valued Antoine at $1,000, a lot of money for a slave at the time—although of course placing any price on a human life is horrifying. Antoine had a reputation as a master of plants and was employed in Oak Alley’s gardens.

Dr. Colomb gave pecan graftwood cut from his beloved tree to Roman, who in turn passed it on to Antoine, who began grafting an unknown number of trees near the great mansion. Sixteen of his initial grafts were successful. Eventually, Antoine grafted 126 trees at Oak Alley. We don’t know anything more about Antoine’s life.

After the Civil War ended, Oak Alley went through a rapid succession of owners who cut down many of the pecan trees to make way for sugarcane. But enough productive trees remained in 1876 for the latest of the new owners, Hubert Bonzano, to exhibit pecans at the Centennial Exhibition in Philadelphia. The nuts were displayed alongside Alexander Graham Bell’s telephone, the Remington typewriter, Heinz ketchup, and the right arm and torch of the Statue of Liberty. Professor William H. Brewer, Chair of Agriculture at Yale’s Sheffield Scientific School, awarded Bonzano a certificate for his pecan, commending its “remarkably large size, tenderness of shell, and very special excellence.”

Their presence at the exhibition led Antoine’s trees to be named “Centennial,” and to become the world’s first acknowledged pecan variety. An enslaved man’s grafting technique had allowed the selection and propagation of superior pecan trees. Others copied his work, and the commercial pecan industry was born. Farmers made a profusion of new selections around the turn of the 20th century, and propagated and planted the new varieties across the South, as an alternative to King Cotton. In the non-native state of Georgia alone, pecan production grew to 20 million pounds by 1936. Georgia is now the top state in the nation for pecan production with more than 100 million pounds produced annually.

Pecans remained a local commodity for a long time, enjoyed mainly in the South, but global demand for them has skyrocketed in the last decade. Much of the emerging marketplace is in China, where the nuts are cracked, soaked in a salty or sweet solution, baked in the shell, and then enjoyed as a snack around the Chinese New Year celebration. Domestic demand is on the rise too. Scientists have discovered that pecans’ golden kernels are heart-healthy, with antioxidant effects, and help to lower bad cholesterol.

J.T. Roman’s notations regarding Antoine state only that he was “a Creole Negro gardener and expert grafter of pecan trees.” But Antoine, like so many enslaved individuals hidden from the world, was much more. His skill ultimately made possible the propagation of more than 1,000 different pecan varieties, which today are planted commercially in 14 states and on every continent except Antarctica. Our nation’s history of slavery cannot be glossed over—but within that tragedy are countless examples of courage, perseverance, and contribution which have made America what it is today. Antoine’s story is but one of these.

Lenny Wells is an associate professor of Horticulture and Pecan Specialist in the College of Agricultural & Environmental Sciences at the University of Georgia. He is the author of Pecan: America’s Native Nut Tree.