The Mythology and Art of the American Road Trip 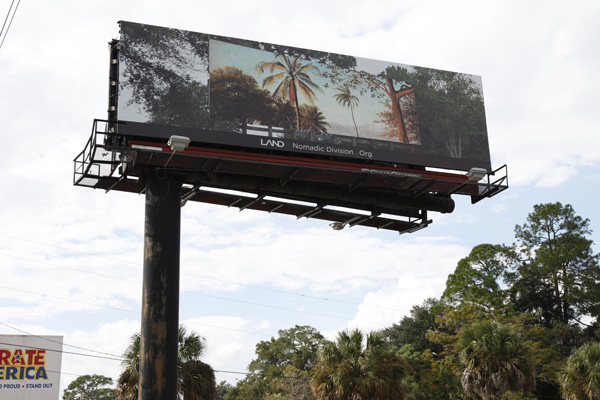 An art exhibition usually takes place in a gallery, where you go to see work that’s been installed there for a few months. But what if you could see an exhibition unfold over space and time, while speeding along the freeway in your car? 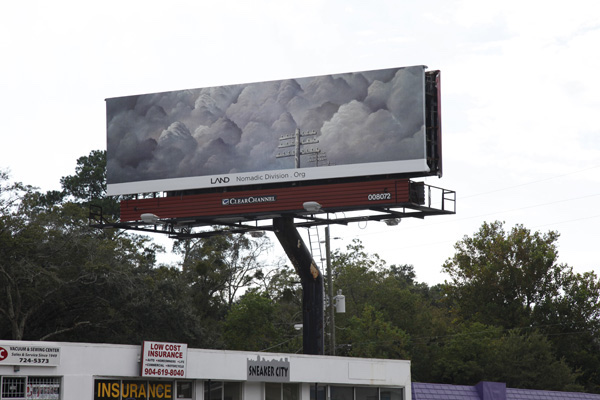 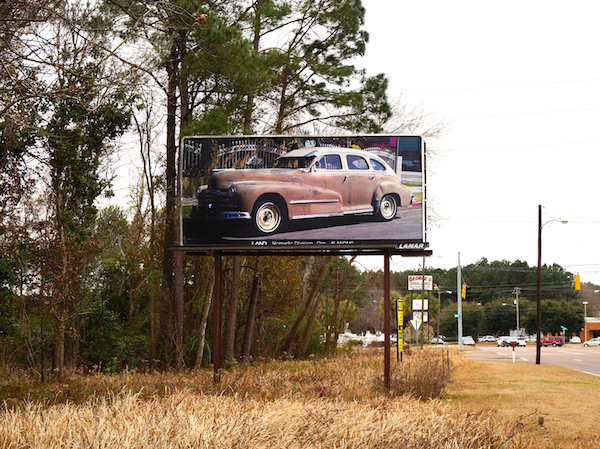 The Manifest Destiny Billboard Project, conceived of by L.A.-based visual artist Zoe Crosher and co-curated with Los Angeles Nomadic Division (LAND), answered that question with a series of about 100 billboards by 10 artists installed along the I-10 Freeway—from Florida to California. 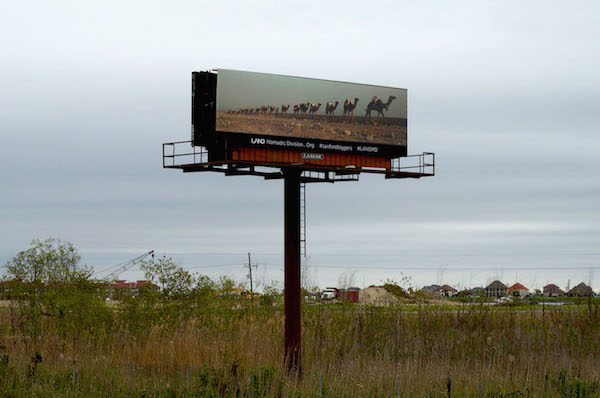 In 2013, Crosher and LAND’s director Shamim Momin invited 10 artists to create “chapters” of 10 billboards, and the results were as diverse as the landscapes they inhabited. In New Orleans, people spotted a billboard by Sanford Biggers—a photograph of a long line of camels crossing an arid desert—while Houston drivers pondered the four words printed on one of Eve Fowler’s billboards: “the difference is spreading.” 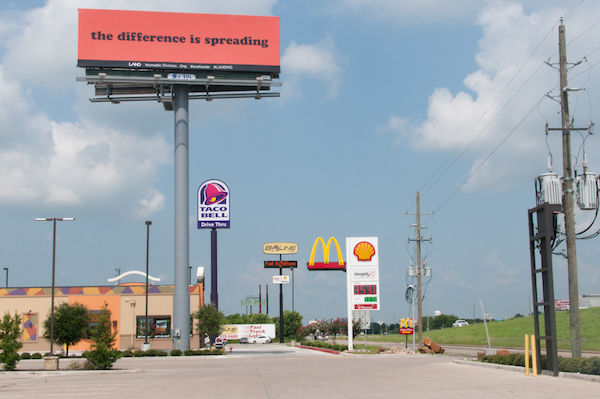 For Crosher, this kind of reflection is key to the Manifest Destiny Billboard Project.
“The hope is to urge people to reconsider the history and mythology of the cross-country road trip,” says Crosher. “Instead of talking abstractly and fantasizing about the trip west, the idea is to physically move through the very landscape being fantasized.” 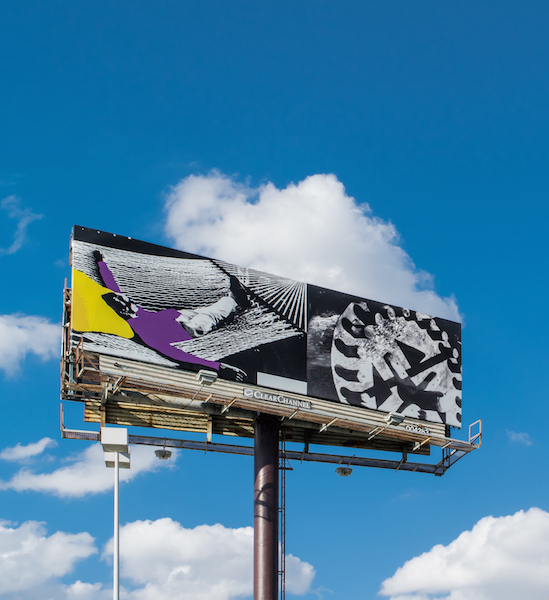 The first 10 billboards went up in Jacksonville, Florida, in October 2013—Shana Lutker’s “Onward and Upward” series, which showed historic images of skies, like a painting of pre-Spanish Florida or a photo of Jacksonville in 1909. Whizzing by on the freeway, drivers catch a glimpse of a double image—one skyline superimposed on top of another. 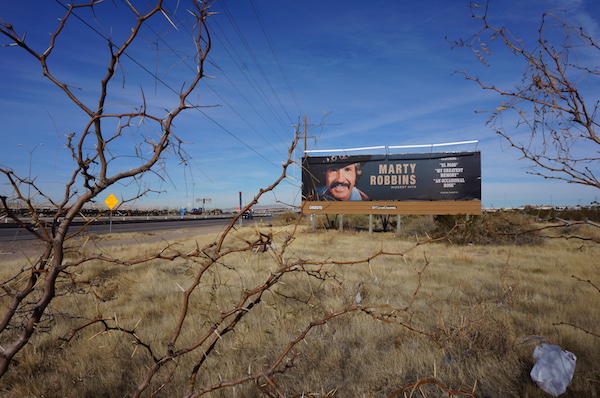 After Florida, billboards popped across the I-10 east to west—from Alabama and Louisiana to three cities in Texas, then on to New Mexico, Arizona, and finally California. The last chapter, by Matthew Brannon, will be installed in L.A. in late June, to coincide with a culminating weekend of events and exhibitions throughout the city related to the project’s themes. 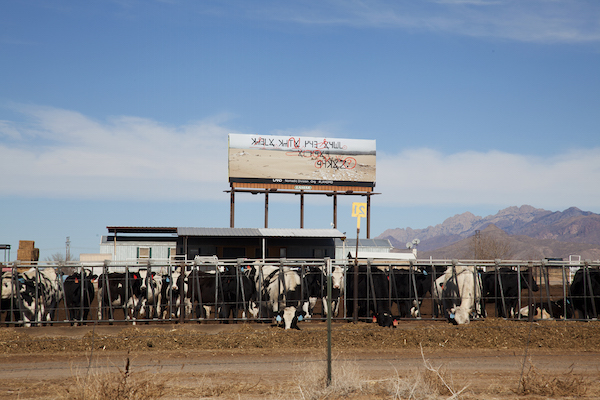 Several of the project’s artists played with the device of repetition so often used in traditional advertising—using the same image on every billboard so it became ingrained in commuters’ minds. For his chapter, “Love and Work,” in San Antonio, John Baldessari created a split image of a man reclining in a hammock and a huge black-and-white gear. The visual parallel of man and machine, and leisure and labor speaks to “the precarious balancing act that is both America’s ambition and the source of many of its most salient problems,” according to the project description. 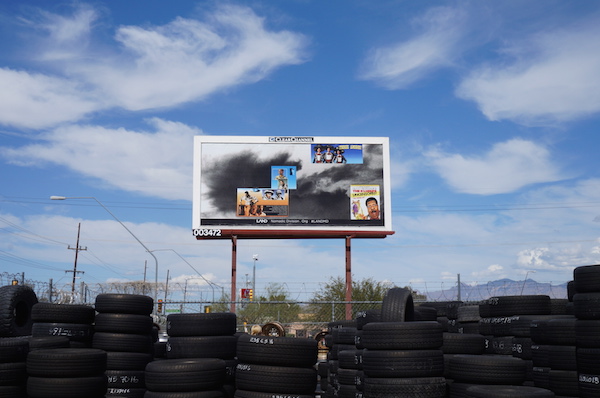 Crosher’s own chapter, “LA-LIKE: Shangri-LA’d,” went up along the I-10 in Palm Springs in April 2015. Her billboards show lush green foliage—which is meant to symbolize the promise of abundance in contrast to the desert that surrounds it—that becomes increasingly brown and withered as you progress through the billboards. 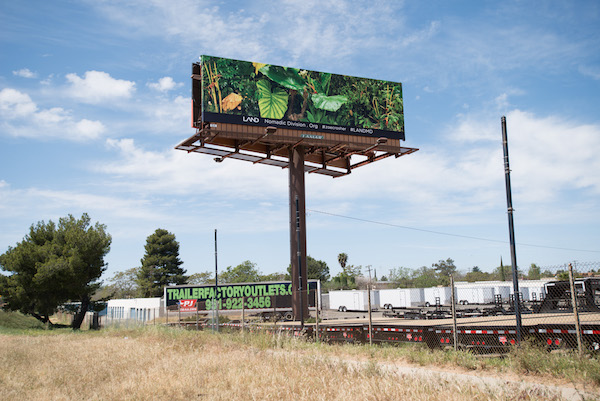 The quick glimpse, the experience of viewing art at 70 miles per hour, is part of what makes the project so special. “When you actually see the billboards, it happens so quickly,” said Crosher. “There’s this wonderful moment of billboard hunting, of trying to find something that is so very difficult to see, going that fast.”

This was written this for Open Art, a partnership of the Getty and Zócalo Public Square.