What County Fairs Are Good For 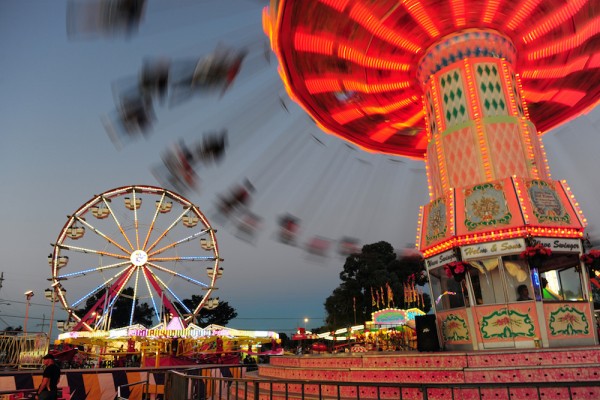 I’m feeling guilty for having failed, as of this writing, to fulfill a central responsibility of California citizenship.

I haven’t been to my county’s fair this year.

The Los Angeles County Fair can be an ordeal. It is an event as sprawling and vast as L.A. itself, and parking is $15. The county insists on holding the fair in September, when the Pomona fairgrounds can feel like the hottest place on earth, and I feel a surge of competing life responsibilities.

But I feel I must go, before the fair closes this Sunday, September 27. We simply have too few opportunities in our extraordinary state to celebrate the accomplishments of ordinary people. And that’s what California fairs are designed to do, in fields as diverse as the floral arts and cheese-making.

Fairs are also among those rare institutions that, along with the university systems and the prisons, truly link our far-flung state. Our fair network pre-dates the Civil War. Today, if you are a Californian, you can attend at least one local fair—and perhaps more than one. Among our 58 counties are 78 fairs operated under the supervision of the Division of Fairs and Expositions, which is part of the state’s Department of Food and Agriculture.

Our fairs are always offering new attractions, but a good part of their value to the state lies in the continuity they provide. In a relentlessly changing California, they remain mostly the same. Their timeless role of advancing public knowledge of agriculture has never been more relevant than during this historic drought, when farming is at the heart of controversies over water usage.

Fairs also remain one of the last vestiges of the egalitarian, democratic spirit we all believe in, but that is fading as a governing principle of our state. Fair operators produce crowds that are representative of their home communities, certainly more so than the electorate these days. The democratic lineage of our fairs is a nationwide legacy: Elkanah Watson, the Massachusetts farmer who launched the first county fair in 1810 to bring together men, women, and children, was a progressive who advocated for free schools, stage lines, and turnpikes.

Four types of entities operate fairs—counties, district agricultural associations, citrus fruit fairs, and the state agency, Cal Expo, that’s responsible for the state fair—and all are democratic institutions. Fair boards are typically volunteers appointed either by the governor or counties. (You can form a district agricultural association with a petition from 50 residents, if you are so inclined).

And in a world divided up into niches, fairs exist charmingly for the general interest, offering something for everybody. The fairs must be held at community gathering places open to all, and attendance at California fairs tends to be strongest in bad economic times or when gas prices are high, and cheap, stay-at-home entertainment is most cherished.

Fairs have an important economic impact; the most recent studies pin that impact at $2.5 billion, including some 30,000 jobs and more than $1 billion in annual spending by fairgoers. And their value may be highest in smaller places. Paso Robles, with 30,000 people, hosts the California Mid-State Fair that draws more than 400,000 people annually. Harder to quantify, but no less important, is all the money that nonprofits raise from their fair booths. One beer booth at the Yolo County Fair helps support four volunteer fire departments. And our fairs, taken together, are the biggest venue for presenting artwork in the state.

The California fair season is long, running from the Indio Date Festival in February through this fall’s strong slate of fairs—including the Kern County Fair, San Benito County Fair, Big Fresno Fair, Desert Empire Fair in Ridgecrest, and the Southern California Fair in Riverside County. And fairgrounds are vital spaces even when fairs are not in session—hosting farmers’ markets, horse racing, home and garden shows, boat shows, car shows, RV shows, concerts, and other cultural events.

California fairs face financial and cultural pressures. They bring in their own revenues, but have struggled to find money to make big investments in their grounds and infrastructure. Fair operators speak with envy of convention centers or arenas that are funded by hotel taxes; they’d like a piece of such revenue streams. (My own idea for a new kind of sin tax—on corn dogs, a fair staple—received an Icee-cool reception when I tried it out on fair people). During the last budget crisis, Gov. Schwarzenegger’s administration even tried to sell a handful of fairgrounds to raise much needed cash, but public support for fairs and legal challenges blocked his efforts.

Fairs have adapted to competition and technology threats; the fairs survived the rise of Disneyland and other theme parks, in part by remaining cheaper, more accessible options. There is worry that, in today’s safety-obsessed society, core fair attractions may come to appear too risky. After all, fairs are invitations to leave the safety of your home, spend hours outside in unpredictable weather, and do all kinds of strange things, often involving fried foods and large animals.

But there’s a price to be paid for democracy, and for fairs. And this weekend, I intend to pay it. I’ll head out to the L.A. County Fair so I can walk among the Chinese lanterns, ride the carnival attractions, check in on the racing pigs, and taste the irony of a deep-fried Slim Fast bar. These are pleasures, yes. But they are also civic duties. See you, my fellow California citizens, at the fair.

Joe Mathews is California & innovation editor for Zócalo Public Square, for which he writes the Connecting California column.

*Photo courtesy of Presidio of Monterey.