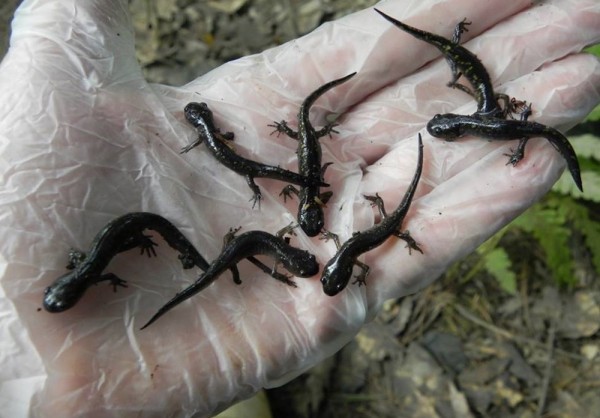 Newly metamorphosed salamanders—both spotted and unisexual—getting ready to leave the vernal pool. Researchers wear gloves to prevent the spread of disease from pool to pool. Courtesy of Kristine Hoffmann.

Birds do it, bees do it, and so the song goes, even educated fleas do it. But unisexual salamanders don’t.

These all-female amphibians clone themselves to make eggs—all girls—and they’ve survived this way for five million years. A real-life lineage of Amazonian amphibians, they achieve the seemingly impossible, generation after generation. Whatever your deepest beliefs about what is natural, normal, or even conceivable with sex and reproduction, these seven-inch salamanders blow them out of the water.

What’s more, grasping exactly what they’re up to could help us understand how climate change will affect northern ecosystems.

Unisexual salamanders seem rare, but they are abundant from the east coast as far west as the Great Lakes. Where I live in New England, the person who studies them, as part of what’s called the Blue Spotted Salamander Complex, is Kristine Hoffmann, an energetic PhD candidate at the University of Maine. I tried to talk with her in the fall, but her rigorous daily schedule of visiting her radio-tagged salamanders in their damp woodsy hideouts kept us from finding a time until late December, after the salamanders had crawled away to sleep off the winter in their burrows.

“I grew up in a vernal pool,” Hoffmann told me, referring to the 100-foot-long seasonal wetland situated behind her childhood home in Massachusetts. She spent hours there as a kid, looking at wood frogs, salamanders and the whole ecosystem of creatures that gravitated there to breed, lay eggs, and mature before leaving in search of a hidden place to hang out when the pool went dry. Hoffmann, in waders and giant gloves, checks some salamander breeding cages in a small vernal pool still partly covered with ice. It was raining. Big Night is more fun for amphibians than it is for people. Courtesy of Kristine Hoffmann.

In 2012 Hoffmann came to Maine to study how urbanization was impacting vernal pools and the blue spotted salamanders. In Maine, salamanders may be the most abundant vertebrate—certainly more populous than people or moose. Scientists have estimated that in Maine the total weight of the salamander population actually exceeds that of people, but that is partly a function of Maine’s small human presence and vast woodlands. In any case, salamanders are a rarely seen but critical part of the ecosystem, in particular in the early spring when they are a feast of “little hamburgers” for hungry owls, skunks, and even just-out-of-hibernation bears who eat their eggs.

Hoffmann quickly realized that these salamanders, for all their importance, were scientifically mysterious. “Nobody had ever just followed a blue spotted
salamander and seen where they lived and what types of wetland they liked.” So Hoffmann got to work hiking to dozens of wetland sites, trapping and measuring and releasing scores of salamanders and then using statistics to compare their preferences. Her survey became so ambitious she ended up asking groups of Upward Bound high schoolers from Maine to design cheap new live traps. (Watch a video.) With the new traps, she and a crew monitored 42 wetlands over the course of two years.

She also implanted tiny radio transmitters in some salamanders so she could follow them. Some, she discovered, could walk as far as 400 meters in a week. (In Ohio labs some salamanders have walked nine miles on a treadmill. Poor things.)

The salamanders’ new year begins on what Hoffmann and other scientists call Big Night, the first warm night of spring when it is raining and the air smells like mud even though there is still ice in the tops of the vernal pools. On that night all of amphibians are on the move, which is why so many frogs end up getting smashed on roadways. The salamanders wake up in their burrows and head downhill to the pool. If they find one that’s too small it will dry up before their babies metamorphose. If it’s too big it’ll have fish that eat their eggs. But, if they’re lucky, they end up in a vernal pool that’s just right.

A mating frenzy begins. Male frogs and female frogs pair up. A male blue spotted salamander, whose blackish gray back is peppered with attractive pale blue spots, approaches a female blue spotted salamander, nudges her with his snout, hugs her from behind, and then rubs his chin over her snout while vibrating his hind limbs alongside hers. Eventually he lets go of her and drops some sperm packets in the mud and she picks them up with her cloaca and then the sperm and eggs combine and divide. Blah blah blah.

Well, that’s how the straight salamanders do it anyway. Amidst the frenzy, the female unisexual salamanders—who look almost identical to the blue spots—sneak in and steal some sperm packets. These sperm then stimulate their cloned eggs to divide, but the genes in the sperm may or may not be taken up by the dividing eggs. So some embryos will have two sets of chromosomes from their mother, and others will have three sets, including one from dad. There’s a name for reproducing via sperm-stealing: kleptogenesis. A male blue spotted salamander. His sperm is used by the unisexual salamanders to stimulate the development of their eggs. Courtesy of Kristine Hoffmann.

This suggests that it’s we sexual reproducers who are the weirdos. Why devote so much energy to finding partners if there’s another way? The unisexual salamander is a compelling data point in this argument. People used to think that parthenogenesis “cost” organisms by making them more vulnerable to parasites and predators and more inclined to go extinct. But the unisexual salamanders have survived lo these five million years—ever since two salamanders of different species met in some ancient pool and did their thing. When their chromosomes didn’t line up exactly their offspring produced eggs with two chromosomes, not one. As time went on, these salamanders swapped out their original genes with new ones from nearby salamanders. So the unisexual salamanders who descended from this ancient pair are part of other “complexes” with other salamanders across North America.

“Salamanders are kind of strange,” observes Hoffmann. “Usually animals have a set of rules for unisexual reproduction, but salamanders don’t follow them.” Some of the unisexual salamanders she’s found have not just two or three sets of chromosomes but four or even five.

And in the vernal pools, things get even stranger. In other salamander complexes, the usual ratio between unisexual salamanders and their sperm donors is 2 to 1 or 3 to 1. But in the Maine vernal pools that Hoffmann surveyed there are 78 unisexual females for every blue spotted male. That’s a ratio that’s theoretically impossible because it’s thought that a blue spotted male only has enough sperm packets for 7-35 females. Are the males producing a lot of sperm? Are the females reproducing without males? “They’re doing something theoretically impossible and we don’t know what it is,” she says.

This spring Hoffmann will do a series of studies of salamanders to see how they’re reproducing, but the question isn’t just academic. The blue spotted salamanders are at the bottom of their geographic range, and as the climate warms, they may move further north. If it turns out that the unisexual salamanders can reproduce even without male sperm, then Maine may still have lots of these salamanders to feed our bears, eat our mosquitos, and outweigh us. If not, well, the woods may change right beneath our feet.