Home » Headline, In the Green Room 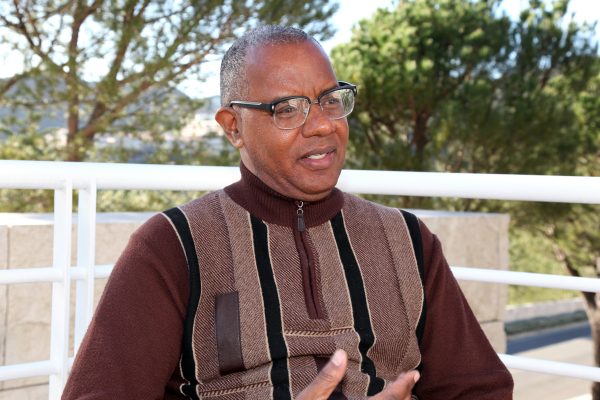 Jamel Shabazz is a fine art, documentary, and fashion photographer whose work focuses on the African American experience. Before taking part in a Zócalo/Getty “Open Art” panel discussion at the Getty Center in Los Angeles to consider the question, “Does Art Capture Reality Better Than the News?” he chatted in the Zócalo green room about Kangol hats, Kool and the Gang, and the pleasures of strolling along the Gowanus Canal.

Q: Do you have a personal favorite fashion item that you’ve kept over the years and never would part with?
A: I purchased a velour hat in Germany in 1978, and I’ve held onto it for a long time; I use it in a lot of my retro photo shoots. And it means a lot to me because it’s symbolic of my time in the U.S. Army in Germany. I’m considering donating it to the Smithsonian.

Q: How long were you in the service?
A: Just three years.

Q: Did you have any nicknames as a kid?
A: Kangol, because I used to wear Kangol hats a lot.

Q: Do you have a happiest childhood memory?
A: My cousin, who’s the same age as me, had a Doberman pinscher, and I had a German shepherd. My cousin and I were best friends, and our dogs were best friends, so we were often walking together in the park overlooking the Gowanus Canal in Brooklyn. Just enjoying life as 12-, 13-year-old kids.

Q: That neighborhood has changed so much, like so many of the neighborhoods you started photographing in the ’70s and the ’80s. What’s it like now to go back to those places?
A: It’s painful, to be honest with you. The neighborhoods have changed, many would say for the better, and I would agree. But the residents that once made up the community are no longer there. So I’m looking for people to reconnect with, and no one is really there anymore. It’s pretty much the same situation from Harlem to Brooklyn to Staten Island.

Q: Was there a particular teacher who really shaped your life, or even changed it?
A: There was a professor—his name escapes me right now—who taught a class on black psychology when I came home from the Army, in 1981. That class really opened up my eyes, because he passed around an image of a newspaper advertisement and asked us what it was. He was showing racism in advertising. It was a photograph of three children—two white, one black—and one of the white kids was elbowing the black kid, and the other was holding a pumpkin on the black kid’s head. We all missed it at first, but I got it later. I cut the ad out, and I still have it to this day, and I use it in a lot of my teaching.

Q: What profession would you practice in your next life?
A: I’d work in the field of mental health. I think there’s a void there, and I worked in it for 10 years as a correction officer. I think that’s an area I’d like to revisit among young people, disenfranchised and suffering from mental illness.

Q: If you could have any superpower, which would you choose?
A: To bring peace in this world.

Q: What’s the best advice you ever got?
A: From my father: Carry your camera everywhere you go, and always have it set.