How Charleston Celebrated Its Last July 4 Before the Civil War 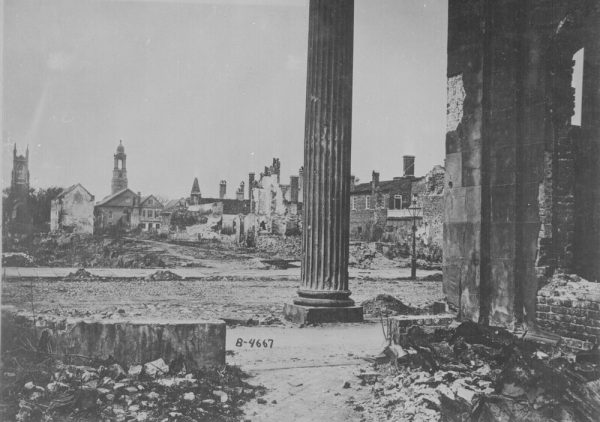 In the cooling evening air, Charleston, South Carolina’s notable citizens filed into Hibernian Hall on Meeting Street for the traditional banquet to close their July 4th festivities. The year was 1860, and the host, as always, was the ’76 Association, a society formed by elite Charlestonians in 1810 to pay homage to the Declaration of Independence.

The guest of honor was one of the city’s most beloved figures, William Porcher Miles, Charleston’s representative in the U.S. Congress in Washington. A former professor of mathematics at the College of Charleston, Miles had won his city’s heart with his heroic efforts as a volunteer nurse to combat an epidemic of yellow fever on the coast of Virginia. He was not a planter, and not even a slaveholder, but he believed in the Constitution and in the slave master’s rights sealed by that compact—and he had come to believe that America was best split into two.

Miles wasn’t happy when, amid the clinking of glasses, a poem approved by the ’76 Association was read out loud in the hall:

The day, when dissevered from Union we be,
In darkness will break, o’er the land and the sea;
The Genius of Liberty, mantled with gloom,
Will despairingly weep o’er America’s doom …

It was just a poem, mere words, sounded with a muted note of elegy. But there was no such thing as “mere words” in the blistering heat of this Charleston summer, with war about to erupt. Words, in 1860, were weapons. And these particular words struck a blow at an equation that secessionists like Miles had labored to forge between their cause and the broader American cause of freedom. This verse presented a quite different idea—the notion, heretical to the secessionist, that the sacred principle of liberty was bound up with Union, with the bonds linking together all of the states, and all of the people of the nation, from Maine to Texas.

So it went for Charleston in this year, beset with a complicated, even excruciating welter of emotions on the question of secession. As determined as so many in Charleston were to defend their way of life, based on slavery, under sharp challenge from the North, still there was room for nostalgic feeling for the Union and for the ideals set forth in the Declaration.

Independence Day in Charleston had begun as customary, with a blast of cannon fire from the Citadel Green at three o’clock in the morning. Roused from their slumber, Charlestonians made ready for a day of parades by militia units in colorful uniform. In the 102-degree heat, the men of the German Artillery, sweltering in their brass-mounted helmets, could only be pitied.

Surely, the town’s secessionists thought, it would be a fine occasion to trumpet their ripening movement. They would celebrate Independence indeed—the coming liberation of the South from the clutches of the nefarious Union. As odd, even bizarre, as this might seem today, Charleston’s secessionists sincerely felt they were acting in a hallowed American tradition. They saw themselves as rebels against tyranny, just like their forefathers who had defeated the British to win America’s freedom some 80 years before. In this instance, the oppressor was the Yankee Abolitionist in league with the devious Washington politician, together plotting to snatch from the South the constitutional right of an American, any American, to hold property in slaves.

By the summer of 1860, these self-styled revolutionaries seemed to be winning their improbable campaign. Back in the spring, at the Democratic National Convention, held in Charleston that year, Charlestonians packed the galleries and cheered wildly when radical Southern Democrats walked out of Institute Hall in protest over the refusal of Northern Democrats to agree to a party plank giving the slaveholder an unimpeded right to operate in western territories like Kansas and Nebraska. The rebel delegates proceeded to establish their own separate “Seceding Convention,” as The Charleston Mercury called this rump group. In its comment hailing the uprising, The Mercury, a daily bugle call for secession, declared that, “The events of yesterday will probably be the most important which have taken place since the Revolution of 1776. The last party, pretending to be a National party, has broken up; and the antagonism of the two sections of the Union has nothing to arrest its fierce collisions.” A Northern reporter strolling the moonlit streets wrote of the occasion that “there was a Fourth of July feeling in Charleston last night—a jubilee … In all her history, Charleston had never enjoyed herself so hugely.”

In this electric atmosphere, public expressions in favor of the Union could scarcely, and maybe not safely, be heard. An abolitionist in Charleston risked being tarred and feathered. Horace Greeley’s New York Tribune, America’s largest paper by circulation and a standard-bearer for abolition, was banned in the city.

It was all the more remarkable, then, that the poem confessing to despair over the Union’s impending collapse was read for all to hear at the banquet at Hibernian Hall on July 4. Rep. Miles could hardly let a handwringing cry for Union stand unchallenged. He held his tongue at the banquet, but five nights later, at a political meeting of town folk held at the Charleston Theatre, up the street from Hibernian Hall, he gave his constituents a tongue lashing. “I am sick at heart of the endless talk and bluster of the South. If we are in earnest, let us act,” he declared. “The question is with you. It is for you to decide—you, the descendants of the men of ’76.”

His words, and many more like them, would win the summer of 1860 for his camp. Charleston’s passion was for rebellion—and the banquet poem turned out to be a last spasm of sentiment for the Union. Repulsed by such feelings, the Charleston merchant Robert Newman Gourdin, a close friend of Miles, organized rich Charlestonians into a Society of Earnest Men for the purpose of promoting and financing the secession cause. When an Atlanta newspaper mocked Charleston’s insurgents as all talk, no action, a member of the group responded in The Mercury that the Earnest Men would “spot the traitors to the South, who may require some hemp ere long.” True to their identification of their undertaking with the American Revolution, the secessionists also formed a new crop of militia units known as Minute Men, after the bands that gathered renown in colonial Massachusetts for taking on the British redcoats. Recruits swore an oath, adapted from the last line of Jefferson’s Declaration of Independence, to “solemnly pledge, OUR LIVES, OUR FORTUNES, and our sacred HONOR, to sustain Southern Constitutional equality in the Union, or failing that, to establish our independence out of it.”

In November, with the election to the presidency of Abraham Lincoln, the candidate of the antislavery Republican Party, Charleston went all in for secession. Federal officeholders in the city, including the federal district court judge, resigned their positions, spurring The Mercury to proclaim that “the tea has been thrown overboard—the revolution of 1860 has been initiated.”

Charleston’s “patriotic” uprising ended in ruin—ruin for the dream of secession; ruin for the owner of human chattel, with the Constitution amended to abolish slavery; ruin for the city itself, large parts of which were destroyed by federal shells during the Civil War. The triumph, won by blood, was for the idea expressed ever so faintly by the men of ‘76 at Charleston’s July 4th celebration of 1860, and made definitive by the war—the idea that liberty, and American-ness, too, were inextricably and forever tied to union.

Paul Starobin is the author of Madness Rules the Hour: Charleston, 1860 and the Mania for War (PublicAffairs, 2017). He lives in Orleans, Massachusetts.