In San Juan Bautista, Site of a Famous Mission and a Hitchcock Masterpiece, It’s Apocalypse—Now 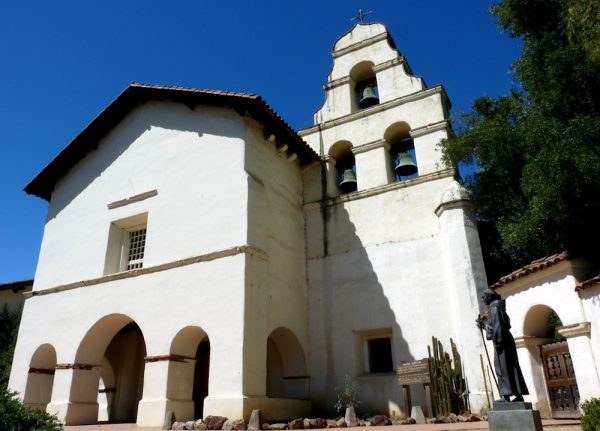 The Mission San Juan Bautista, which sits on the San Andreas Fault, has endured earthquakes and witnessed the violent clash of civilizations. Can it survive the future? Photo courtesy of Rachel Titiriga/Flickr.

If the apocalypse comes to California, I’ll be ready. After all, I’ve been to San Juan Bautista, which has centuries of experience with the ending of worlds.

I visited the San Benito County town again this summer, when Armageddon seems closer than ever. North Korean missiles may now be able to reach California. The president of the United States has the nuclear codes and no impulse control. Icebergs the size of states are breaking off Antarctica. The Bulletin of Atomic Scientists has moved its Doomsday Clock 30 seconds forward; it’s now just two-and-a-half minutes to midnight for humanity. “Global danger looms,” the Bulletin said.

California is famous for its proximity to disasters—from earthquakes to riots to floods—but this moment seems especially apocalyptic. Our governor is incapable of giving a press conference without predicting that unmitigated climate change will kill us all—and soon (but not until after he himself is dead, he adds). Judging by the size of the fires raging from Yosemite to Modoc, our incendiary end may already be underway.

And even if we manage to survive natural and man-made apocalypse, Elon Musk says robots will just inherit the world anyway.

In these scary times, a tiny place like San Juan Bautista—with fewer than 2,000 people, off 101 between Gilroy and Salinas—might seem like an escape. But no California place is more haunted by visions of apocalypse—historically, seismically, cinematically.

Armageddon and the town come together in the most famous local structure, the Mission San Juan Bautista, the 15th of the 21 missions the Franciscans built in the late 18th and early 19th centuries. It is distinguished by its size—it had the largest church of any mission—and its subsequent fame, as the setting of the most terrifying scenes of Alfred Hitchcock’s thriller “Vertigo.” 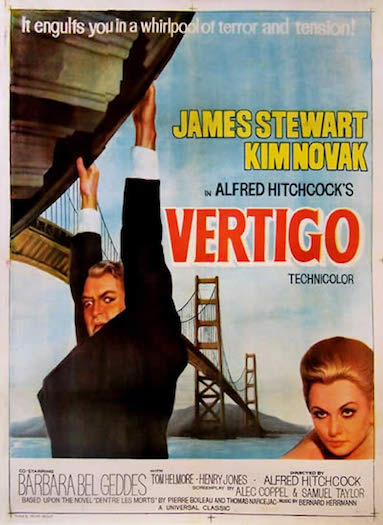 Look out below! Some critics have interpreted Alfred Hitchcock’s 1958 masterpiece “Vertigo,” which climaxes at Mission San Juan Bautista, as an allegory of humanity’s failure to recognize and avoid its past mistakes—until it’s too late. Image courtesy of Jon Rubin/Flickr.

Shortly after arriving in the town, I headed to the mission, with several bottles of water in hand. The bottles had been a gift from my hotel; signs around town warn you not to drink the local water because of high levels of nitrates, which are blamed on fertilizer use and the area’s hydrology.

At the mission, I walked into the Guadalupe Chapel, where Father Alberto Cabrera was saying Mass and singing many verses of “Amazing Grace,” including this one:

The earth shall soon dissolve like snow,
The sun forbear to shine;
But God, who called me here below,
Will be forever mine.

The hymn in that setting put me in mind of the apocalyptic story of California’s Indians, and their enslavement, forced conversion, and deaths by the thousands, mostly from disease. The mission period saw a decline in the state’s native population from 300,000 in 1769 to 250,000 when the missions were secularized in 1834. Then came the U.S. conquest and what historian Benjamin Madley has shown to be an “American genocide” that reduced the population from 150,000 in 1850, to 30,000 a quarter century later.

This history feels especially alive in San Juan Bautista. Descendants of decimated local tribes have raised the topic so consistently that Bishop Richard Garcia of Monterey gave a highly publicized Mass of reconciliation at the mission in 2012, asking for forgiveness for the sins committed against Native Americans in California. (Whatever quiet that bought was erased when Pope Francis made Junipero Serra, the mission system’s founder, a saint in 2015.)

Another player that has kept the subject in the public mind is El Teatro Campesino, the progressive theater, based less than half a mile from the mission. The theater has built a national reputation with diverse works, some of which look back at Mission Indians as well as at the Aztec and Maya civilizations that suffered their own catastrophes.

For all the weight of past apocalypses, looming destructions are plainly visible at San Juan Bautista. After walking through the mission cemetery, past the sign that says that 4,300 Mission Indians are buried there, I encountered a U.S. Geological Survey marker noting what lies beneath the mission: the San Andreas Fault.

For more than 200 years, the fault has damaged and destroyed parts of the mission. A big retrofit is being planned for next year, but can the mission stand at this dangerous spot for another 200 years? The end is so close-by that it’s right under our feet.

From the mission and the fault, I strolled across the grassy Spanish square, bordered by preserved buildings that are part of a state historical park. Among the structures is the Castro-Breen Adobe, named half in honor of Patrick Breen, the Irish immigrant who, with his wife and seven children, joined the Donner Party. They survived that cataclysm and lived to tell the tale.

The square is instantly recognizable to movie buffs. Jimmy Stewart and Kim Novak run across it in the two most dramatic scenes of “Vertigo.” Each of those scenes ends with a different blonde woman seemingly falling to her death from the mission tower. The church had no tower when he filmed in San Juan Bautista 50 years ago—the one you see in the movie is a Hollywood special effect.

But those cinematic falls in San Juan Bautista have spawned a cottage industry of analysis, with “Vertigo” as the story of the self-deception and inevitable self-destruction of mankind, the triumph of death over life. One great philosopher of our age, Jean-Pierre Dupuy, a Frenchman who teaches at Stanford and is a friend of Gov. Jerry Brown, has written that the movie inspired his own career as “an enlightened doomsayer” who developed “a metaphysics of the age of catastrophe that awaits us.”

Dupuy devotes the epilogue of his masterful book, The Mark of The Sacred, to “Vertigo’s” complicated plot, and especially to how Stewart’s character allows himself to be twice deceived by Novak’s character, only realizing the resulting peril after it’s too late.

In this, Dupuy sees humanity’s failure to recognize how close we are to the apocalypse. By the time we see with our own eyes that Armageddon is real, it will be too late.

The apocalypse, Dupuy writes, is nothing like death, which can be sweet, as when those who knew a person recall their memory. The apocalypse threatens us with the greater horror: nothingness. If humanity ends, it will be as if all the places and people who came before—Alfred Hitchcock or the Donner Party or the California Indians—had never existed.

To save ourselves and our memory, Dupuy argues, we must treat the apocalypse as inevitable, and embrace it, study it, and stare as deeply as possible into the abyss, so that humans might find some way to avoid falling in.

So, please, visit the apocalypse as soon as you can. San Juan Bautista is nigh.