Take Me Out to the California League 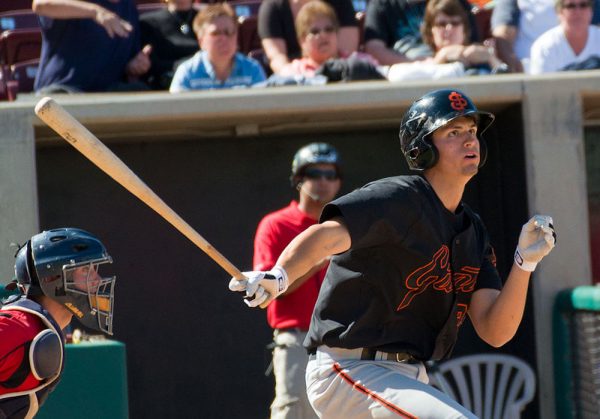 Take me out to the ballgame this summer? Sure, as long as you’re taking me to San Jose or Visalia or Lake Elsinore.

Yep, I know those cities don’t have major league teams—that’s the point. In California these days, Major League Baseball is miserable. But the California League—our very own minor league—is a little-known jewel, binding together our most challenged cities and regions with wholesome and affordable entertainment.

This summer, I’ve made a point of attending California League games in search of an antidote to the awfulness of California’s five major league teams.

Three of our five big league franchises—the Oakland A’s, San Francisco Giants, and San Diego Padres– are having terrible seasons. A fourth, Anaheim’s Angels, is merely mediocre. The stadiums in Oakland and Anaheim have decayed into dumps. Even the one California championship contender—my hometown Los Angeles Dodgers—greedily clings to an expensive cable contract that prevents most Southern Californians from seeing this promising season on TV.

Even if you love baseball as I do, the Major League product is hard to watch. Games are long and tedious—often more than three hours—with little action, as strikeouts and walks reach record numbers. Ever-increasing ticket and concession prices have turned stadiums into palaces for the rich: A game can cost hundreds of dollars if you’re taking family or friends. This year, I surrendered my share of a Dodgers season ticket after a 74 percent price increase. Over the 15 years I had it, the price had increased 400 percent.

But since there’s no crying in baseball, let’s move on to the good news. The California League will restore your faith in professional sports. The games are fast-paced (the lack of TV commercial breaks helps), the ballpark entertainment is fun and unpredictable, and tickets are affordable for working-class Californians.

Of course, the California League is in California, and mirrors the state and its challenges. The league, like California, is beautiful but is also showing its age (it was founded in 1941, two decades before the major leagues came to California) and is struggling to maintain and replace stadiums before teams move to other states.

The California League serves poorer places in a state with America’s highest poverty rate. The league has teams in Stockton and San Bernardino, two cities known for surviving devastating municipal bankruptcies. The California League is strongest in two of the state’s most economically challenged regions—the San Joaquin Valley and the Inland Empire—each of which has three teams. The other two squads are in Lancaster, in L.A. County’s high-crime High Desert, and San Jose, a city with some wealthy residents but a starving government because it has too few sales-tax producing businesses.

Like California itself, the league has trouble with out-of-state migration. After the 2016 season, two of the 10 teams were shut down and shifted to the Carolinas. One, the High Desert Mavericks, left after the city of Adelanto, concluding a longstanding dispute with team ownership, canceled the Mavericks’ lease in the publicly owned ballpark. (An attempt to relocate to Chico failed.) The Diamond, home of the Lake Elsinore Storm, a member of the California League, where the action is fast-paced and the tickets are affordable. Photo courtesy of SD Dirk/Flickr.

The other, the Bakersfield Blaze, departed after seven years of unsuccessful attempts to replace historic Sam Lynn Ballpark, which had its charms but failed to meet the minimum facilities standards of professional baseball. Among its problems: a strange alignment in which the stadium faced the setting sun, dangerously affecting the vision of players and, on occasion, forcing sun delays.

Charlie Blaney, the California League’s president, told me that the state’s elimination of local redevelopment agencies earlier this decade has thwarted attempts to build new ballparks in Bakersfield and elsewhere. While more than 100 new minor league ballparks have been built around the country over the last generation, the California League hasn’t had a new park since Stockton was constructed in 2004. It’s hard to construct housing in California—for people or minor league teams.

At the same time, the age and history of the league and its ballparks make it distinctive, and great. Whenever I’m in Visalia, I try to stop by Recreation Park, built in 1946 and cannily renovated in 2009, to watch the Rawhide play in one of the smallest parks in minor league baseball. The players are so close that you can hear them chatting with each other, and can sometimes join the conversation. And it feels at least five degrees cooler inside the ballpark on sweltering Valley nights, even though the place is often packed.

Also worthy of adoration is The Diamond, the clean, environmentally sustainable home of the Lake Elsinore Storm, a Padres affiliate. The fans are devoted—the team draws 200,000 people a year (usually first or second in the league) to a western Riverside County city of just 55,000—and with good reason. The Storm are expert at creating fundraisers and partnerships with local schools and nonprofits.

But there is no place better to watch a ballgame than in the league’s oldest park, San Jose Municipal Stadium, which opened in 1942. The only major league ballparks older than San Jose’s minor league field are two national treasures: Fenway Park in Boston and Wrigley Field in Chicago.

The San Jose Giants, an affiliate of San Francisco’s Giants, spruce up the old place with paint—baseball cartoons, baseball quotes, notes on baseball history, and baseball banners cover every flat surface. The lovely old grandstand pleases nostalgists. The open picnic space down the left field line appeals to party-throwing companies and millennials. Behind the plate, Giants staffers keep their office doors open so fans can walk in. The players are close enough for fans to get to know personally; in the right field corner, young women spent much of the game I saw flirting with pitchers in the Giants bullpen.

The stadium shows signs of age—worn spots by the pitcher’s mound and in right field. And a lack of bathrooms in the grandstands requires the presence of port-a-potties down the lines. But I paid $13 for a ticket and sat just to the right of home plate, 10 rows up. (You can’t sit in Dodger Stadium for less than $21 even at the cheapest game.)

I saw a close, well-played game that lasted just more than two hours. Every minute between innings was filled with entertaining promotion. Fans played blackjack against the mascot Gigante (to promote a local casino), and hit golf balls from the stands into an on-field bucket (in a contest promoting a local golf course). In a nod to a plumbing company sponsor, a toilet was carried onto the field and a child was invited to throw balls into it. Late in the game, two fans faced off in an air guitar contest.

The crowd was diverse in ethnicity, race, and age, and large for a weeknight. Fans really came alive when the night’s designated “Beer Batter,” Arturo Nieto of the visiting Modesto Nuts, came to the plate. The fans taunted Nieto until he struck out swinging, which triggered the announcement that beer would be half-priced for the following 15 minutes.

“Don’t run too fast and don’t drink too fast,” said the public address announcer, as one-third of the crowd scurried to the beer stands.

I hadn’t planned to stay the whole game—I had to get to Salinas for an interview the next morning. But the hot dog and the Fritos nachos tasted great, and I was having too much fun to leave early. I can’t wait to go back.