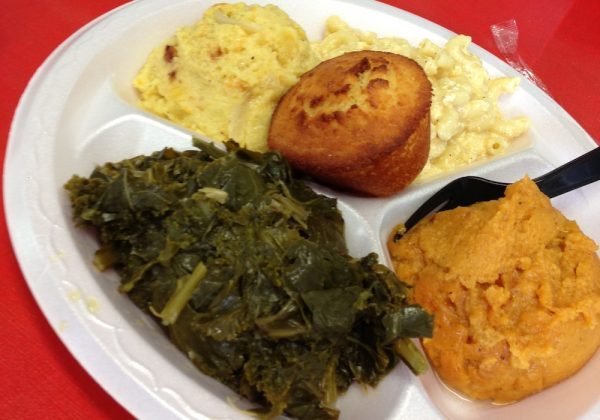 It was New Year’s Day in Charlotte, North Carolina, and seemingly half of Mecklenburg County had come to the K&W Cafeteria for black-eyed peas, greens, and hog jowls—foods to bring good luck for the year ahead. The Formica tables were packed with local ladies in their fancy hats, college kids, tired families, and business folks in suits, all snaking slowly through a winding line to order.

We were at the K&W reflecting on a year-long mission to understand how Southern food shaped Southern identity. Both of us are academics at Southern universities, and we had come to our project with an interest in how rhetoric plays a role in shaping Southern identity—that is, how words and symbols send messages about how we see ourselves and others, our opinions, and our actions. We also both grew up in the South. Ashli is a Virginian; Wendy, a Texan. As adults, we chose to stay here to work and raise our families, knowing that the South would always feel like our only true home.

Exploring how Southern food communicates, playing a vital role in shaping and creating the identities of Southerners today, was a dream assignment—a rare chance to combine our work with pleasure. Food is a vital cultural component. It acts rhetorically by articulating identities and inviting individuals to embrace those identities. Analyzing food in the South, we believed, would help us better understand this culture we loved, in a broad-sweeping and universal kind of way. After all, everyone eats. Southerners, in particular, take a great deal of pride in family recipes, and have strong opinions about the regional cuisine. It is easy to get people to talk “Southern food-ese,” whether they are originally from the region or not.

Our travels took us from Charlotte, North Carolina to Birmingham, Alabama, and from Memphis, Tennessee to New Orleans, Louisiana. We prepared maps and agendas, wrote interview questions and brought note-taking tools, scheduled meetings, and made reservations. Before we took off, friends and family asked us which spots made the list for the “authentic Southern food experience.” Would our itinerary include Athens, Georgia’s Weaver D’s, Charleston’s Husk, or Austin’s Franklin’s Barbecue? Or were we going to stop by a Cracker Barrel in every town? This second question was generally a joke, a knowing nod to the roadside restaurant chain’s often-derided faux-Southern decor and mediocre food. There would be no Cracker Barrels on our eating tour, we assured them. We knew “real Southern” fare when we saw it. Indeed, we would be frequenting places like Domilise’s, the legendary dive in uptown New Orleans known for its po’ boy sandwiches. The current explosion of writings on Southern food might not yield a uniform definition, but it almost always emphasizes locally grown produce, ingredients that were readily available and inexpensive, and a strong connection to the land. We would follow the lead of those in the know.

We did go to Domilise’s, and it did not disappoint. We waited 20 minutes, in wilting humidity, for the famous crusty French bread sandwiches, stuffed with fried shrimp, oysters, or roast beef. Photos, autographs, and beer bottles from long-shuttered breweries adorned the walls. The bar was weathered by the touch of thousands of visitors. Diners chatted away, happily greeting familiar faces behind the counters. It was obvious why folks in a town full of great food were so devoted to this spot. The food not only brought them to the same location, but also connected them through shared sensual experiences—the sights and sounds of the neighborhood joint, the smells and tastes of the simple meal so closely tied to the region.

Domilise’s was the real deal. But the scene at K&W, and many other eateries like it, seemed to be, too. Whether Grandma cooked the hog jowls or not, eating that particular dish, in that particular place, was necessary for the Charlotte crowd to start the year successfully. Being there, we were participating in an important community ritual. This gave us pause. Like Cracker Barrel, K&W is a chain, with dozens of locations, in several states. There is little, if anything, artisanal about it. But it was apparent that its patrons on New Year’s Day were having a “real Southern” food experience. Were chain restaurants necessarily inauthentic expressions of Southern identity, as some food critics—not to mention so many of our friends—seemed to think?

The more we traveled, the more we began to wonder. We also began to question our attempts at scholarly remove. Getting mired in details was distracting us. This epiphany dawned at a chicken shack place in Middle Georgia that sat next to an old gas station. We fumbled with greasy fingers to record our experiences, getting odd looks from fellow customers and the women behind the counter—the very people we wanted to connect with. In Atlanta our food tour schedule was packed with too many restaurants, and the places we had chosen to visit seemed too controlled. So we stopped relying on critics’ lists of places we needed to visit, chefs we needed to watch, foodie experiences we needed to have. We decided just to eat, to listen, and to let the whole weird experience wash over us. There were more spontaneous stops along the roadside, and fewer reservation-heavy New South restaurants.

Fundamental questions started to emerge. What the heck was Southern food? And what, for that matter, was being Southern? We had started with a sense of what made a dish “real,” and had set out to find eating experiences that fit our definition. When our approach changed, our definition of authenticity began to shift, too. We saw many Souths, many kinds of Southerners, and many foods and experiences that could count as “real.” Was a Southern meal defined by particular foods, like BBQ, fried chicken, and grits? We had imagined our research would focus on discovering the boundaries circumscribing Southern cuisine, but instead we found a food culture in flux. Southern food doesn’t belong to a certain region; its reach extends beyond the traditional South and can be hard to determine. Ashli’s definition of real Southern barbecue is the vinegar-y (with a touch of tomato) pulled pork you find in Piedmont North Carolina. Wendy’s is beef brisket and sausages. Appalachian soup beans are very different than shrimp and grits. All of these foods are Southern. Collard greens, macaroni and cheese, and carrots served up at Homestyle, housed in a trailer outside of Hattiesburg, Mississippi. Photo by Wendy Atkins-Sayre.

So, we learned, is chorizo. In Charlotte, North Carolina, a Sav-Way grocery in one formerly industrial neighborhood now serves an immensely popular torta made with the sausage, at a lunch counter in the back. An expanding immigrant community in the South has brought countless additions to old recipes. Hummus, a traditionally Middle Eastern dish, has found its way to highbrow Southern tables in the form of mashed boiled peanuts, field peas, or Lima beans. Sandra Gutierrez, food writer and cookbook author, draws on Latin American traditions and adds a Southern twist. Chiles rellenos can be stuffed with pimiento cheese for a Southern flair.

There’s a long tradition of Southerners incorporating ingredients that are abundantly available but not necessarily “authentic” to the region in their food, such as casserole staples like Velveeta cheese and cream of mushroom soup. The Stokes family’s holiday shrimp mold, combining crustaceans with canned tomato soup, gelatin, celery, onion, and cream cheese is one such example of old-school Southern food with alien origins. As Ashli’s mother-in-law explained, it has to be served with Ritz crackers and it has to be served at Christmas. It does not matter that combining shrimp with gelatin might seem weird. Chorizo in Charlotte may one day be the same kind of thing. Oddball dishes become Southern food when they make their way into family traditions and stories. They send messages about family, about togetherness, about defining who you are in your corner of the world.

We found ourselves moving away from concentrating on the boundaries of Southern food and instead let the food speak for itself, experiencing everything from the Homestyle Restaurant, housed in a trailer home in the piney woods outside of Hattiesburg, Mississippi, to a Popeye’s franchise in Jennings, Louisiana. We learned to let the people we met define the food for us. It became less important to define Southern cuisine and more important to embrace all that is—and wants to be—Southern. Southern food more broadly defined gives us all something to discuss, and even celebrate.

Some have opined that Southern food is in danger of extinction because of changes in the region, including increases in the numbers of chain restaurants, and the general suburbanization of so many Southern towns. But our travels revealed that a vibrant and evolving regional food culture brings people together and unites them, whether through a shared love of certain dishes or even heated arguments inspired by food loyalties. That Southern cuisine is moving forward by blending its own traditional ingredients and methods with those of other cultures, regions and times—and, even, taking root in chain restaurants—is a nod to its roots and a sign of breaking ground, a demonstration of how the South itself can become stronger while also changing.

Southern food may, in fact, both reflect current regional changes and also lead the way in crafting a new South, one where its culture echoes its changing people—more inclusive, more diverse, and more hopeful, influenced by influxes of immigrants, and newly fast-paced Southern cities. Optimistic, yes, but possible. The South is still here, but maybe not the one you, or we, were expecting.

Ashli Q. Stokes is Associate Professor of Communication Studies and Director of the Center for the Study of the New South at UNC Charlotte. Wendy Atkins-Sayre is Professor of Communication Studies and Department Chair at the University of Southern Mississippi. Their book, Consuming Identity: The Role of Food in Redefining the South is available from the University Press of Mississippi.