This could be us but we’ve confined ourselves #poem 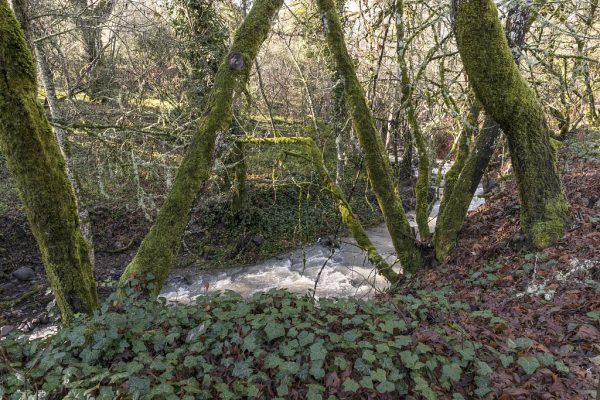 Moss-covered trees along Mill Creek, beside the Bale Grist Mill, between St. Helena and Calistoga, California. Photo by Carol M. Highsmith/Courtesy of the Jon B. Lovelace Collection of California Photographs in Carol M. Highsmith’s America Project, Library of Congress.

of the Gihon River, their laughter
carried by the crisp air

of late winter. It’s Spring technically
but it’s hard to tell with the piles of snow

barely melting from rooftops. I see one girl
then the other run & let their feet slide them

across the water’s glossy edge. I hold my breath.
This could be us but we’ve confined ourselves

to white-walled rooms, to make art
that we’ll send back to our homes

in the cities & deserts we come from, where
it’s more Spring than here, where the streets crowded

visible under the snow. Eventually, we’ll leave behind
the things we’ve made—the photograph

taken near the covered bridge on School Street, this poem,
my portrait you’ve painted these past few days

—because in the end we lose everything
we love, covered over by a new green.

Eloisa Amezcua is an Arizona native. Her debut collection, From the Inside Quietly, is the inaugural winner of the Shelterbelt Poetry Prize selected by Ada Limón. She is the founder and editor of The Shallow Ends: A Journal of Poetry.