Who Are the Homeless People in My Library? 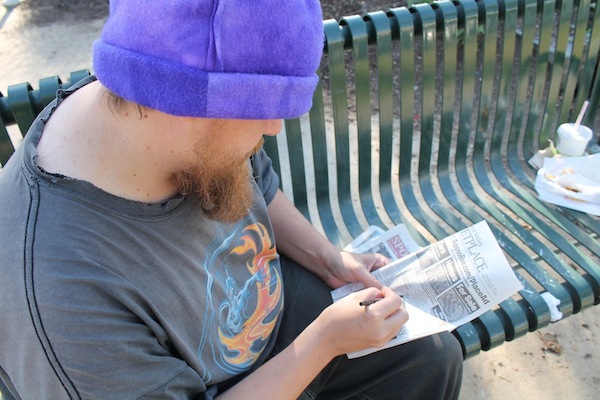 Several years ago, when I first began working as a librarian at the Central Library in downtown Fresno, I escorted a daily customer named James toward the door at closing time. He usually came when we opened and left when we closed. He seemed to know everyone at the library, so most of his time was spent visiting with friends. He’d borrow a magnifying glass since he didn’t have glasses, and use it to peruse the local newspaper. As we parted ways one day, I recall saying: “Okay, James, it’s time to go home.”

Shortly after, I learned how presumptive that statement was. James slept in a variety of places, like the police station lobby, a breezeway next door to a nightclub, and the entrance to a nearby credit union. But none of these could be described as “home.”

James started telling me more about his life outside the library. After a few years, he told me he was finally old enough to start receiving Social Security checks and had enough money to get a small apartment. During this stage of transition, James approached me at the reference desk and asked me how to get a checking account; he didn’t feel safe with his money on him.

It struck me how vulnerable he was, and I recommended that he immediately sign up at the very credit union where he had once slept. After he moved into his place, a fellow librarian delivered a bit of furniture. Another of my coworkers helped him locate a bed. 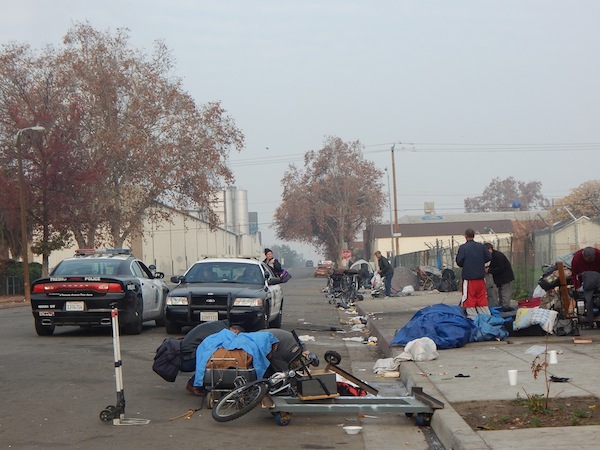 Since encampments were banned in Fresno, tents cannot be permanent. In the morning, police make sure those whose who spent the night on the streets pack everything up.

I wondered how many other people knew the personal stories of those, like James, who didn’t have a permanent home. So in the summer of 2014 I began working on a short documentary to shift public conversations from one about “the homeless problem” to one about diverse individuals who don’t have housing. I wanted to encourage contact and understanding between Fresno’s housed and unhoused. The resulting film, Our Lives: Surviving the Streets of Fresno, will have its premiere at the Unitarian Universalist Church of Fresno on April 10, and be available at the library for home viewing.

To get started on the documentary, I had to identify potential interview subjects. By then, James was no longer a daily visitor and didn’t want to return to a painful chapter of his life. So I started with Dre, another library regular who lived on the streets. Dre didn’t want to be interviewed himself—he mentioned a lawyer’s advice, which I’d never expected—but he did have some great ideas. He pointed out that nobody was going to open up with some white lady who looked like a social worker; I needed to find someone who was trusted on the streets and could introduce me to interview subjects.

Dre introduced me to Yellowfeather Noriega. For many years, Yellowfeather lived in downtown Fresno’s encampments—makeshift housing structures made of scrap wood, located on streets or vacant lots. Local homeless advocates funded port-a-potties, and for a while the city even offered trash pick-up. Yellowfeather became homeless in the early 2000s on account of her addiction to meth, and while living in the encampments she dealt drugs to support her habit.

The encampments hosted many of Fresno’s homeless people until late 2013, when the city stopped providing basic services, posted eviction notices on each of the structures, and then tore them down. At this time, the city was at the midway point of its 10-year plan to end chronic homelessness, with a strategy of putting resources into housing programs instead of maintaining the encampments. In practice, there are not enough resources to house everyone on the streets, so step one for the housing authority is assessing those deemed most vulnerable (literally, those who are most likely to die on the streets, if nothing changes). Those with the highest ratings are put in apartments, almost rent-free.

When I met Yellowfeather, she was about one year into sobriety. She was living at Dakota EcoGarden, a small, environmentally friendly alternative to traditional homeless shelters. It features a house with rooms for rent and common areas, plus spaces for tents in the backyard, but it is a homeless shelter all the same. Yellowfeather passed a sobriety test to live in one of the tents. 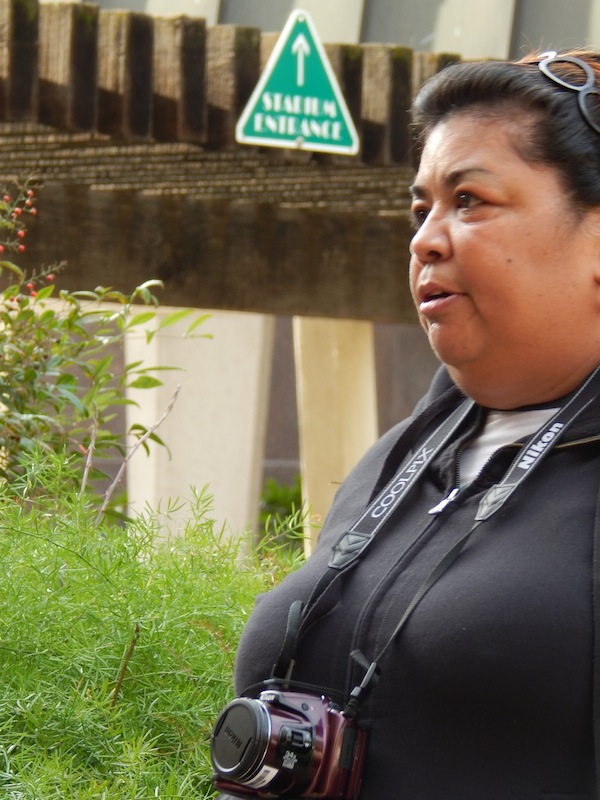 Yellowfeather joined me and several others (including library staff and additional representatives from the homeless community) at a film-making training at Fresno’s Community Media Access Collaborative. Soon afterwards, she recruited several people she knew from the streets for two days of interviews at the library. By this time, I had decided it would be better for Yellowfeather to ask the questions I’d prepared instead of doing this myself. As I stood behind the camera and listened to the warm exchanges she had with her friends, the stories hit surprisingly close to home.

Jesse was a man once in the same drug rehabilitation program as Yellowfeather, and was very open about his continuing methamphetamine abuse. When he talked about suffering from bipolar disorder, I thought of my own sister-in-law’s most recent manic episodes. She has disappeared more than once. What would her life look like if she didn’t have loved ones who got her help? How would Jesse’s life be different if he had had the same?

Nolan, another interviewee, knew Yellowfeather from the main homeless shelter in downtown Fresno. But drugs and alcohol weren’t Nolan’s problem—he just didn’t have a place to stay after his grandmother died. After finding out he had “problems with his memory” and being placed in special education in high school, he’d had several entry-level jobs while living with his mom. When his mom died, he took care of his grandmother. When his grandmother died, family members in other parts of the state connected him with local services and the local homeless shelter has been home ever since.

A few months have passed since we completed filming. Yellowfeather secured an apartment with government assistance, in part because the city has deemed women to be among the most vulnerable on the streets. She is now a personal friend. We play Words With Friends on our phones, share book recommendations, and discuss interior decorating options for our respective homes. She is active in her church, helps her mother get through chemotherapy, and carries pictures of her daughter, who is serving in the military.

Chronic homelessness was just a part of Yellowfeather’s story; she had a life before she became homeless and she is starting a new one now that she’s got a roof over her head. This is true for all who sleep on the streets.

I’m hoping that Yellowfeather will join other interviewees featured in the film in a panel discussion after our first screening. But life is complicated, even when you think you’ve put homelessness behind you. Because Yellowfeather had drug charges from her time living in the encampments, she still had warrants out for her arrest when she got sober. She was supposed to start community service in lieu of jail time last month, but she has to pay a fee of $10 a day for the community service. It may seem like a small amount, but she can’t keep up with the payments since she hasn’t found a job yet. She is turning herself in for the jail time at her next court date.

Yellowfeather gets to the heart of the misguided attempts to solve the “homeless problem” when she says, “It’s going to take an effort of the community to erase homelessness because you can’t erase people. We are not going to disappear.” The shantytowns are now gone, but Fresno is nowhere close to ending homelessness. In fact, according to the most recent grand jury report on Fresno’s 10-year plan to end chronic homelessness, the overall number of people on the streets is projected to grow by as much as 25 percent as veterans from recent wars return. Fresno still lacks a short-term temporary shelter for men. Nationally, the Fresno area has the highest percentage rate of chronically homeless still sleeping on the streets rather than in shelter beds.

For too long, we’ve just averted our eyes when we see homeless people. My hope is that the film will, at least, get us to look at our fellow Fresno residents, and strike up a conversation.

This article is supported by a grant from the California Wellness Foundation.