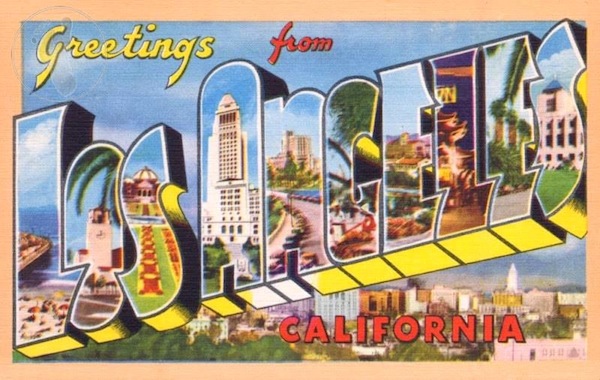 Who says Angelenos only like new, shiny things? When Zócalo and KCRW teamed up to ask locals, “What’s the old-school L.A. spot you love most and why?”, we were bombarded with answers that show this city’s love for the crusty and dusty.

It’s clear that our tastebuds hold some of our most deep-rooted memories—several people rhapsodized about Philippe’s, the downtown birthplace of French dip sandwiches, and Manuel’s Original El Tepeyac Café in Boyle Heights, with its signature, chile-verde-stuffed “Hollenbeck Burrito.” And if drinks are also on the menu—as at the former Rat Pack hang out Chez Jay in Santa Monica or the martini-soaked Musso and Frank Grill in Hollywood—all the better.

We come back to many of these old treasures because they retain the ability to entertain and impress us. We still bring children to see the dancing wooden puppets at Bob Baker’s Marionette Theater just outside of downtown L.A., pack our picnics for summer nights at the Hollywood Bowl, and contemplate our place in the universe at Griffith Observatory above Los Feliz.

Of course, a lot of people can’t choose just one old-school place as their one true love. We get it—who can really say whether it’s more fun to go to Dockweiler or Venice Beach? But, sometimes you have to pick. In advance of the Zócalo/Getty “Open Art” event, “Is L.A.’s Past Worth Saving?”, these are some of the places Angelenos—including our mayor—couldn’t imagine life without.

Jensen’s Recreation Center. The brick-clad building in Echo Park is topped with a sign that promises bowling and billiards. Every time I’d walk by my neighborhood landmark, I’d imagine the men who wandered in for a shave at the barbershop on the first floor, or families stopping by for a spot of lunch at the counter. It evokes the richness of L.A. past. —Mayor Eric Garcetti The Observatory … After you admire this marvelous building, you can look out to the view. That’s when you understand Los Angeles as the city and Los Angeles the natural beauty.—Beto Loya

The Observatory. It’s always been my favorite place—Kirsten Conroy

Griffith Park—I remember going there for picnics as a child, and it seems like it really hasn’t changed much. Still a great place to take the family, I especially love hiking to the top of Mt. Hollywood (starting at the Observatory) for the fantastic view of so much of the county, and beyond!—Mayu Silk Art

The Original Farmer’s Market is my happy place since I was a baby. Love to meet my friends and co-workers for lunch at least once a month.—Nina May The melting pot that is the Original Farmer’s Market.—Art Guitierrez Trevino

The Farmer’s Market on Fairfax, LACMA, the Brentwood Country Mart, and the Fox Theater in Westwood. Good times!—Christine Suh

My favorite days in Los Angeles are when I’m attending an event at the Hollywood Bowl, the quintessential Los Angeles experience!—Brian Allman

The Hollywood Bowl because it’s so L.A. Always entertaining, a melting pot of performers, and while it’s old school, it’s also the “it” thing to do every year.—Rolando Marin Jr.

The Dresden. Marty and Elayne are the best.—Eric Torres

Philippe the Original! A unique old-school standout with its maze of seating options upstairs and down.—Thom Arredondo Tommy’s original off 3rd and Rampart. My parents use to take us here when I was a kid and, oh man, the best chili burgers ever!—Eliath Mena

Canter’s on Fairfax. The hours and patrons.—Joseph Beamon

Canter’s Deli on Fairfax! My earliest memory is going for lunch with my grandfather after meeting the 5th Dimension, sometime in the late 60s. The fall leaf pattern is exactly the same. AND, the smell of sulfur at the George C. Page La Brea Tar Pits. My grandmother and I used to go there frequently and that smell to me is lovely. Both are very special places (memories), and true old school L.A.!—Shawn Groves El Cholo restaurant, the original one on Western!—Leslie Carlisle Hamburger

The Original Pantry for breakfast, El Tepeyac for lunch … Both of those should fill you up the whole day especially the “Manny’s Special”—Herb Schmidl

The Rómulo Pico Adobe because it’s as “old school” as you can get. The beautiful adobe building is the second oldest residence in the city of Los Angeles and also houses a great obscure history museum.—Jason Vega

The Bob Baker Marionette Theater absolutely captivates and transports me to a simpler time with every visit. Having known Bob and his undying devotion to his craft (my youngest child thinks he was a relative, we were there so often), I am moved to tears by every show as I think of the joy he took in entertaining children. My heart will break if that theater ever closes.—Leslie Pruitt

Chinatown. My mom would take me there as a child to buy the most delicious birthday cakes. So happy to see that particular bakery is still around! I’ve seen people drive in from well outside of downtown for those cakes and pastries!—Elizabeth D. Funez Grand Central Market … always stop for lunch there anytime we are near it and whether some of our group want sushi, Middle Eastern, Mexican, or seafood, we ALL leave happy at a fair price.—Bryon Dennison II

The downtown L.A. train station with its wooden benches and beautiful tile work, just across the street from Olvera Street. It is part of my family heritage.—Clarissa Banda Venice Beach! It’s always an interesting and entertaining place to go hang out. And it’s the beach (my favorite place).—Renée Simone

Musso and Frank! Best place for a martini!—Shannon Mercogliano

City Hall, the Bradbury, for their old L.A. history and architecture. Musso and Frank and Taylor’s Steak House because I’m a man, damn it. I need scotch and steaks.—Martin Silva

Taylor’s Steakhouse in Koreatown … opened by a Texan many years ago and carried on by his sons. While the steaks are great, and the old school maroon leather booths and dark wood paneling are cool, what really rocks is their CFS (chicken fried steak)—the only place this Texan would order it outside the Lone Star state and her own kitchen.—Lambchop Atkinson