Keeping My L.A. Hood Together, One Baseball Bat at a Time 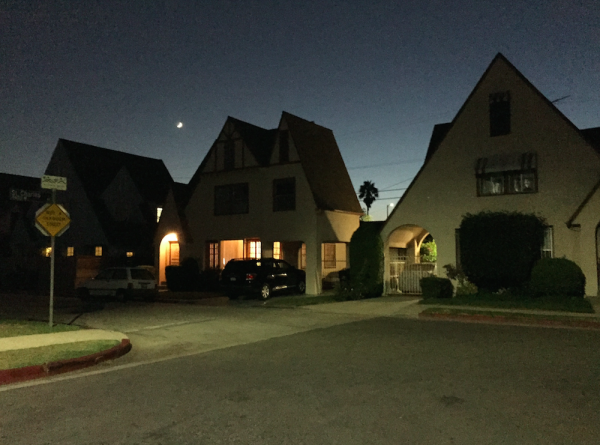 L.A.’s Mid-City area stretches roughly from Crenshaw Boulevard west to Robertson Boulevard and from Pico Boulevard south to the 10 Freeway. In the northeast corner of Mid-City, nestled between three neighborhoods where the asking price for houses starts at $1.2 million—Wellington Square, Victoria Park, and Lafayette Square—is a little dead-end street called Lafayette Road.

I’ve been on Lafayette Road my entire life, now in an apartment in the building my family owns. And while this is just a little street on a very big map, its small size has given it a cohesion that’s helped make it a success in sprawling Los Angeles.

Lafayette Road runs south from Venice Boulevard to St. Charles Place and terminates in a cul-de-sac of quaint Tudor homes that have starred in TV and movies (most recently the ABC show Revenge). Lafayette Road was built as part of Lafayette Square in 1910 as a “service road” for delivery trucks scheduled to make drops to residents like Fatty Arbuckle, W.C. Fields, and the industrialist Norton Simon. Lafayette Road was (and is) a mix of single-family homes and apartments that were modest in design, size, and cost. The block is purely residential, though I do know that many years ago, a doctor here saw patients out of his home. Many LAPD officers who worked at Police Station No. 7, now Wilshire Division, lived here. A noted prizefighter lived with his mother in a duplex at mid-block. A horrific murder/suicide took place in 1980, but was upstaged by John Lennon’s shooting in New York on that same day.

My parents, Tom and Bobbie Thammasaengsri, saw a “for rent” sign at 1668 Lafayette Road in 1969; back then, the block didn’t even have street lighting. My parents moved from a place on Lomita Street into what was the first of two “twin” apartment buildings built in 1936 with a French-influenced design. The buildings were commissioned by a pair of sisters who were said to have heckled the builders incessantly during construction. Maybe that explains the building’s odd dimensions. Both properties sold separately to owners over the years (with my parents purchasing 1668 in 1984).

I was six months old when we moved into that building, and 14 when my parents, switching from renting to ownership, bought the building at 1668 in 1984. My parents sent me first to local Catholic elementary and then to the local high school and Cal State Los Angeles, where I studied television and film. For 25 years I have worked for CBS television stations as its senior sports sales coordinator in spot sales. Independently, I’ve produced film and television content and am an active screenwriter.

Lafayette Road’s residents tend to stay long-term, and that goes for owners and renters alike. Its quiet façade is a strong asset; crime seems to concentrate in the surrounding neighborhoods rather than on our block. However, the 1980s would be a galvanizing time when neighbors would come together “to make noise.” A crime problem plagued us, much of L.A., and many large cities that were fueled by drugs, money, and gangs.

Our residents, my parents included, refused to hide. Neighbors got to know each other, formed the block club, and personally confronted gangsters and drug dealers who thought they could take over our neighborhood (even when bullets ended up flying through those neighbors’ windows). Residents put together patrols that were equipped with two-way radios and baseball bats, and roamed the streets from dusk to dawn. To this day, that kind of gang and drug activity has never returned because of the “rogue” reputation we residents gained from our actions.

As a neighborhood, we’ve had some battles over the years, especially the one over efforts by Lafayette Square residents to close Lafayette Road at St. Charles Place—making the square an enclosed community and cutting us off from it. The fight was bitter and lasted a decade. For most of that time, our position was to stop the closure and be recognized as part of the square community, but there was a change of heart. We realized we would be better off with the street closed, and we were right. We now have a quiet street where kids can play, for the most part, without fear of being hit by cars.

The fight against crime and over the road closure had an enduring result: Lafayette Road United Neighbors. This community organization has seated five presidents including me. My mother served twice and set some traditions in place like group recognition of resident deaths, charity fund drives, and street parties. The next and longest serving president was Chuck Utley who was (and is) a “hands-on guy” who still encourages holiday decorating. He’ll pull your trashcans in, change your flat tire, and is first on scene if police or fire is called.

Over the years, older residents died or moved to other communities, opening the door for new, younger residents. After this transition, there were fewer regular interactions between the new neighbors. Why? There are a thousand reasons, but it was something I knew we had to overcome.

After a meeting that drew 15 people in September 2012, I set up a Facebook group and left flyers on all neighbor’s doors touting it while fellowship was still fresh in their minds. We had 17 people join and they saw we could share information at the click of a button. Our weekly “crime map” is my biggest draw. I post information from the Mid-City Neighborhood Council, where I have become a fixture. I’ve posted memorial pieces for those who have passed on, and done play-by-play on breaking news (including a shootout at the LAPD Wilshire Division and a water outage this year that lasted eight hours) Another 23 people have joined the group, bringing its membership up to 40, a majority of our residents.

I’ve also reached out to two of our neighboring areas—Lafayette Square and 16th Place—to build a “three street alliance.” And I got myself trained under CERT (Community Emergency Response Team), a city program to help communities respond; I’m one of the neighborhood team program information officers handling social media. That work relates to my long-term goals for the neighborhood. I want to get as many of our remaining residents on our Facebook, Twitter, and e-mail streams as possible. I want to bring emergency preparedness to the forefront of neighborhood planning and get us prepared when disaster strikes.

I might not be doing any of this if I hadn’t been lucky enough to live on Lafayette Road.

Chin Thammasaengsri currently serves as the president of Lafayette Road United Neighbors, the public safety liaison to the Mid-City Neighborhood Council, and a member of the Community Emergency Response Team (Battalion 18).