How Homesteaders Turned Fragile Arizona Savannas Into a Bare-Earth Desert 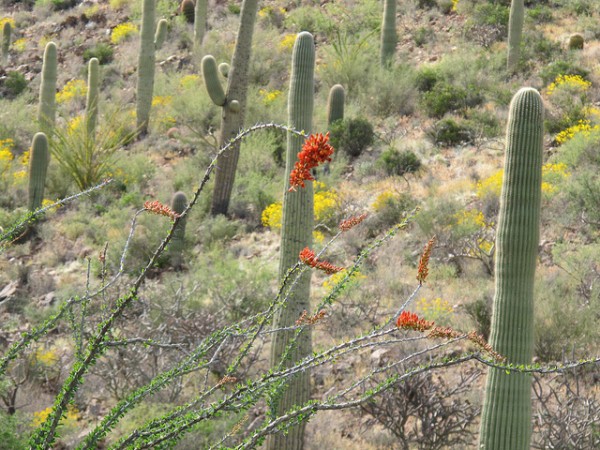 In the Santa Cruz Flats in southern Arizona, the beige of sandy plains, dunes, and clay-filled basins alternate with green swaths of irrigated cotton fields. Save for a rare jackrabbit, the only mammals are underground. Bird-watchers come to see migrating hawks perched on power poles waiting for rodents to venture forth into one of the remaining cultivated maize fields or sod farms.

To call the Santa Cruz Flats a man-killing dust bowl is no exaggeration. Fierce dust storms known as haboobs blow across barren “playacitas”–little beaches of bare ground. When the Flats’ fine surface soils are swept away by dust storms, it’s so hard to see that scores of people have died in rear-end traffic accidents on Interstate 10. The annual rainfall is less than 9 inches, more than half of which falls during a monsoon season that may flood a normally dry Santa Cruz River to overflowing.

It may be hard to believe, but, until about 100 years ago, portions of the Flats supported a thriving, if fragile, grassland. In the summers, you could walk among grasses named Rothrock grama, Arizona cottontop, and tanglehead that grew up to 2 feet high. Ironwood and acacia trees regularly dotted the landscape and provided shade for mule deer and pronghorn antelope. Two species of jackrabbits were abundant, and, at the Flats’ southern extremities, you might catch a glimpse of a shy bobwhite quail. After a humid thunder-and-lightning storm passed, such diverse species as the green toad and the cheddar-yellow Arizona caltrop flower would wake up from their slumber as if by magic.

The Santa Cruz Flats were part of an ecosystem known as the Sonoran Savanna Grassland that once covered portions of lowland southern Arizona below elevations of 3,500 feet in places like Tubac, Altar Valley, Avra Valley, and Red Rock. This grassland received an annual average rainfall from 11 to 16 inches–a little more than nearby Tucson–with half or more of this falling during the July to September monsoon. The lower, drier parts of this grassland–such as the Santa Cruz Flats–benefited from flooding from the Santa Cruz River and from soil conditions with good moisture retention. There were no large grazing animals and fires ignited by lightning blazed occasionally across the landscape.

What used to be Sonoran Savanna Grassland has been swallowed up by the surrounding Sonoran Desert. Most sites are now so lacking in grass cover that some biologists have questioned whether they ever had grasses at all. Indeed, a century of farming and grazing appear to have made this change irreversible. Like the Sahara Desert’s relentless advance on the Sahel (the African transition zone in between the desert and the savanna), the retreat of Arizona’s savanna has been a one-way exodus. Only historical photographs and a few areas at the upper edges of Sonoran Savanna Grassland that retain their integrity give us a picture what has been lost. The tall summertime grasses that used to grow in the Sonoran Savanna Grasslands at an unknown homestead in the Casa Grande, Arizona, area.
Image credit: Casa Grande Valley Historical Society

The transformation of tropic and subtropic grassland to bare-earth desert is as dramatic as any ever witnessed. I’ve been able to see the intensity of the loss because I study creatures such as the masked bobwhite, white-tailed hawk, and antelope jackrabbit, which prefer the grasslands, and have seen their habitats disappear.

The story of how the Sonoran Savanna Grassland turned into Sonoran Desert starts with the influx of homesteaders at the turn of the 20th century and their effects on a fragile ecosystem. These settlers considered the area perfect for grazing cattle, horses, burros, sheep, and mohair goats. But the Sonoran Savanna Grassland was covered mainly with annual plants that didn’t have well-developed root structures, making it difficult for them to grow back after cattle had eaten off their leaves and stems.

Grazing in this area typically left bare ground behind. And without fine grasses for fuel, the occasional fire ceased entirely. That led to wind erosion, invasion by woody shrubs and tough weeds that cattle didn’t like, and more bare ground. The livestock’s human minders were also able to settle in what was previously thought of as the middle of nowhere because windmills enabled homesteaders to raise water for livestock and subsistence farms. The tendency of these homesteaders to divert natural drainages and abandon farmlands only heightened the process.

This desertification went virtually unnoticed as Arizona’s forefathers promoted the area for statehood based on three economies: cattle, copper, and cotton. (Later they added climate and citrus.) A powerful “Cowboy Legislature” and pro-ranching state land commissioner kept many grasslands open to continual grazing by small ranchers and homesteaders. During the peak of homesteading in Arizona in the 1920s and 1930s, more windmills and stock tanks sprang up across the landscape, and their livestock nibbled away at what was left of the native grasses. Fires, if they occurred, were extinguished as rapidly as possible, lest any forage be lost.

There were attempts to conserve the native grasslands, especially after the 1890s, when a series of droughts caused catastrophic losses on overgrazed rangelands. In 1903, the U.S. Forest Service created the Santa Rita Experimental Range south of Tucson, to test ways to recover the grasslands. In 1905, President Theodore Roosevelt converted millions of acres of rangeland into national forest, protecting some grasslands at higher elevations. Since then, there have been experiments with livestock rotation, mesquite removal, herbicides, pesticides, predator control, and even total rest of the grasslands; but none has been successful when it comes to restoring native grasses. Those who managed rangelands didn’t understand that two grasslands were involved–a slightly wetter “Desert Grassland” above 3,500 feet elevation, and a lower, more fragile Sonoran Savanna Grassland–and what might allow grass to recover in one didn’t necessarily work for the other. They also failed to see the need for fire, despite a study in 1958 by range ecologist Robert R. Humphrey showing that fire suppression was the principal cause of shrub invasion.

There is hope for reversing the desertification. Eliminating, or greatly restricting livestock grazing–and limiting off-road vehicles–has resulted in a return of grassland conditions at places such as Altar Valley’s Buenos Aires National Wildlife Refuge and Anvil Ranch south of Tucson.

But removing livestock alone will not suffice—not in places like the Santa Cruz Flats where grasses are now mostly absent. Land managers need to aerate the ground to allow the shallow roots of herbaceous plants to take hold, even at the risk of temporary dust storms. Assisting plant growth by tilling and irrigating areas prior to the summer rains may also prove beneficial. Planting and irrigating native woody plants like mesquites along the fissures cut by water would also provide some shelter from the wind and reduce wind erosion. Natural fires should be left to burn wherever possible.

Left to current management practices, the short-lived native grasses may cease after a few years. Even occasional grazing could lead to an expansion of the now impervious playacitas and basins filled with fine clay soils. Winds blowing over these areas will sweep away these soils in increasingly dense clouds, and cover Phoenix and other Arizona cities in dust.

David E. Brown is a research associate and adjunct faculty member at Arizona State University and an adjunct faculty member at the University of Arizona. He worked for the Arizona Game and Fish Department for 27 years, retiring as game management chief in 1989. He is currently working on pronghorn antelope, Mexican ducks, and antelope jackrabbits while completing a biotic inventory of the lower Santa Cruz River.

This was originally published by Zócalo Public Square on 11/15/2014.