The Next Great California Bridge Should Span the High Desert 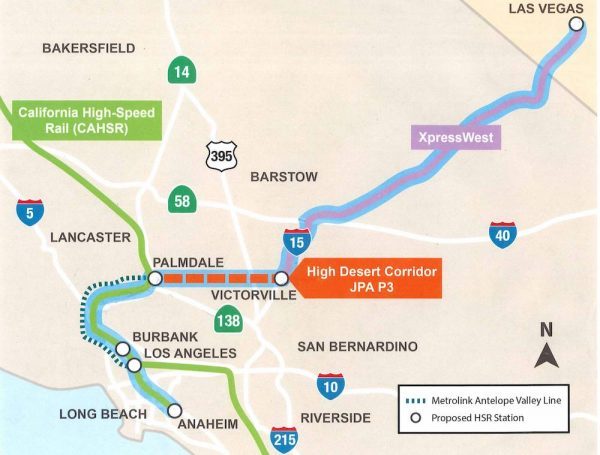 Assuming you don’t have the power to set off a major earthquake, your best bet would be to connect the two small desert cities of Palmdale and Victorville.

These two working-class places aren’t often associated with political power; but building world-class infrastructure to bridge the 50 miles between the two cities might be the most powerful current idea in California. Strong Palmdale-Victorville connections could transform Southern California’s traffic and economy, boost the West’s energy markets, and reconfigure the path of American trade with Asia and the rest of North America. It might even save the California high-speed rail project.

Why is connecting these two small cities potentially so valuable? Because California, for all its glorious north-south highways, has long lacked fast, efficient and safe east-west connections across its mountains and deserts. So to bridge Palmdale and Victorville is to connect the Antelope and Victor Valleys, two fast-growing exurban regions that host two of the continent’s most important highways. The result would be a dynamic High Desert Corridor.

Palmdale’s home region, the Antelope Valley, in Los Angeles County, now has more than 500,000 people (more than the city of Sacramento); its highways make it part of the Interstate 5 corridor, which goes from Tijuana, Mexico to British Columbia. Fifty miles east, the Victor Valley, where Victorville is the anchor town, has some 400,000 people (as many as Oakland), and sits right on Interstate 15, which not only moves Southern Californians to Vegas every weekend but also transports goods from San Diego County all the way to Alberta, Canada.

Current connections between Interstates 5 and 15 are problematic and primitive. Truckers either have to navigate through the awful traffic of the Southern California basin, or must find a way across the High Desert. Look at a map, and the natural place to do that—those 50 miles between Palmdale and Victorville—requires driving on surface streets, or the 138, known officially as Pearblossom Highway but unofficially as Blood Alley, since it’s one of America’s most dangerous roads. It’s also traffic-clogged; the Palmdale-Victorville drive took me nearly two hours recently.

Good news: This infrastructure gap creates an enormous opportunity. Which brings me to the High Desert Corridor, a decade-old proposal that is one of the most underrated ideas in California. Backed by a joint powers authority of Los Angeles and San Bernardino counties, the High Desert Corridor would build not one connection between Palmdale and Victorville, but four.

First would come a 56-mile freeway connecting the two cities, with some of the stretch tolled to help finance the public-private partnership running the project. Second, the High Desert Corridor would establish a high-speed rail right of way, with the goal of connecting the California High-Speed Rail’s proposed station at Palmdale with the planned, private Xpress West high-speed rail project between Las Vegas and Victorville.

The third piece of the connection involves energy: Underground alongside the freeway and rail would run electric transmission lines. The corridor would also devote space to green energy production, as well as charging stations and alternative fuel stations for cars and trucks. And finally, in a nod to politics and younger generations, the High Desert Corridor would have a nearly 40-mile bikeway constructed between Palmdale and U.S. 395, connecting to existing paths near Adelanto.

The impact would be continental, and would go beyond the convenience of connecting the 5 and the 15. Today, international trade is slowed in the L.A. Basin, where the ports of Long Beach and Los Angeles are overburdened and dense traffic makes things even slower. There is also little land left for the additional warehouses and logistics infrastructure to support the ports.

Advocates of the corridor say it could become a new “inland international port,” if land for logistics is closely connected to rail and airports in the corridor, allowing cargo to be moved between transportation modes. Such a port would support trade, spawn more businesses and allow the logistics industry to expand beyond the basin, and thus bring more jobs to the desert for local residents, shortening their commutes.

At the same time, the project could address air and energy concerns in Los Angeles by taking trucks off of Los Angeles’ roads, while providing infrastructure to hasten electric and alternatively fueled trucks. The transmission line could make it easier to manage the Western grid, better connecting California energy with neighboring states.

The high-speed rail piece of the High Desert Corridor would connect San Francisco, Burbank, Los Angeles Union Station, and Anaheim to Las Vegas. In the near term, that would take many Californian Vegas-goers off the roads. In the long term, it might inspire the development of high-speed rail in the West (Phoenix and Salt Lake City would be natural next steps) and better integrate the Western states into a regional economy worthy of the 21st century.

The corridor is definitely green—the energy piece could stimulate more green energy in the desert—but it is also a dodge. Air quality rules in the Los Angeles basin limit heavy manufacturing; supporters of the High Desert Corridor are betting that manufacturers will flock to the desert, since it is outside the basin and its air regulation.

Be skeptical of all this if you wish. The history of the California desert is filled with grand plans that went nowhere. But the High Desert Corridor isn’t a grand plan—it’s a tightly focused connection. The environmental reviews are complete, and the next steps are figuring out the exact route, and the costs of acquiring the right of ways.

Current estimates of the project’s overall cost are $8 billion. That’s a lot—but high-speed rail is projected to cost at least nine times that. Supporters had hoped to fund much of the expense with federal earmarks, but Congress has eliminated them. So the project will require a mix of private and public money, and be built in phases (rail first). Los Angeles County’s transportation tax, Measure M, will provide some dough.

But the state should step up. California politics is dominated by the coasts, and especially the Bay Area, which is why big funds were lavished on the new Bay Bridge. It’s now time to look south and east, and build the next great California bridge in the High Desert.