In California, Pro Football Is for Losers 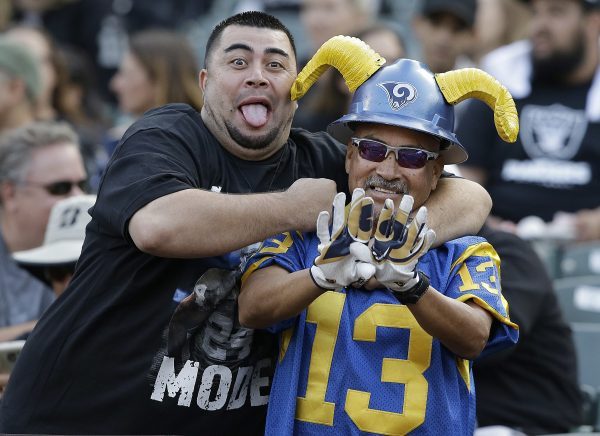 No one can know for sure whether any of California’s four National Football League teams—the 49ers, Raiders, Rams, and Chargers—will emerge as big winners in the new season.

But we already know who the losers will be: California cities foolish enough to host NFL teams.

In the rest of America, major cities try to attract the NFL by building costly new stadiums, because they see football franchises as providing a boost to their economies, and especially to their notoriety. But in California, where the economy is nation-sized and our big cities already enjoy global renown, the dynamic is the opposite. Our big cities have been shedding their pro football teams, and thus avoiding the headaches of devoting valuable California land to stadiums within their jurisdictions.

In this contest, the biggest winner has been San Francisco, which, after wasting decades debating a replacement for the 49ers’ former stadium, Candlestick Park, got free of the NFL headache by “losing” the team to the city of Santa Clara. Across the Bay, the newest winner is Oakland, which resisted building a new stadium for the Raiders; its reward will be the team’s departure for Las Vegas in three years.

San Diego also registered a hard-won civic triumph when—after its voters defeated the last of 15 years’ worth of proposals for lavish new Chargers stadiums—the team left town this summer for a temporary home in the small Los Angeles County city of Carson.

In 2020, the Chargers, along with the Rams—who relocated to Southern California in 2016, after more than two decades in St. Louis—will move into a new, shared stadium in the small city of Inglewood.

The destinations of these teams are telling. The only places in California that seem willing to risk hosting an NFL team are smaller, poorer, obscure cities that sit in the shadow of global municipalities. As such, they are so desperate for any high-profile and distinguishing development that they are willing to devote land and money to wealthy NFL owners, and host teams that won’t even use their new cities in their names. The teams remain the San Francisco 49ers, Los Angeles Rams, and Los Angeles Chargers, not the Santa Clara 49ers or the Inglewood Rams or Carson Chargers.

And that represents the least of the indignities that these smaller towns will suffer from their fateful decision to become NFL cities. Economic studies show that sports teams deliver little in the way of a financial boost to their hometowns—they merely siphon dollars from other entertainment-oriented businesses. That’s especially true of pro football teams, since they play just eight regular-season home games a year, as opposed to 81 for major league baseball teams.

And that doesn’t account for the costs of internecine fighting and civic conflict that greedy NFL teams can engender. Just ask the people of Santa Clara.

Just three years after the 49ers relocated to Santa Clara, the city and the team are engaged in a bitter war of rhetoric, investigations, and lawsuits. The heart of the problem is that, as with so many NFL maneuvers, the deal for the 49ers stadium was a bait-and-switch. Local voters approved the stadium after being told that it would be paid for privately, and the city would bear only a few costs relating to a parking garage and an electric sub-station.

Instead, the stadium required a new hotel tax and the creation of a new public entity that is on the hook for more than $600 million in construction loans. It’s an open question whether stadium revenues will be enough to pay back the loans. Then there’s the opportunity costs. The stadium gobbled up valuable land that might have been better used for businesses that produce more economic activity than a stadium (a Costco, for example), or badly needed housing in a region with a crisis-level shortage.

The stadium is a dud—uninspiringly designed, and situated so that it produces epic traffic jams on game days. And the 49ers have proven to be an awful city partner. The Santa Clara-49ers conflict started with the team’s demand to kick kids off soccer fields next to the stadium so the fields could be used for parking. Court fights have erupted over the 49ers’ financial disclosures, the amount the 49ers pay in rent, and whether the city has made false accusations against the 49ers regarding their level of cooperation with a city audit.

The fight has turned political. A mysterious political action committee sponsored attack ads against city council members who were critical of the 49ers last year (the 49ers haven’t said whether they were behind the PAC). This spring, Santa Clara’s mayor, Lisa Gillmor, told the San Francisco Chronicle: “We learned we cannot trust the 49ers. They are our partners, but they have exploited what we’ve tried to do in the city.”

Things aren’t that bad in Inglewood yet. The opening of that stadium—which is part of a larger development involving entertainment, retail and housing—is still three years away. Construction is already a year behind schedule, and community opposition is growing. There’s also the whiff of bait-and-switch. As in Santa Clara, the stadium was sold as a private project that would cost the city next to nothing. But it turns out that the city could end up giving the project an estimated $100 million in tax breaks, as well as reimbursements for certain security and transportation-shuttle costs at stadium events.

None of this should be surprising. Most NFL teams are wildly profitable, so those teams that have to relocate all carry the stink of failure. All four California teams have relocated, and it’s no coincidence that their owners show up on media lists of the worst owners in all sports.

These include the Rams’ owner, Stan Kroenke, who got rich by marrying a Walmart heiress, and who has produced teams with miserable attendance and losing records for more than a decade. The Spanos family, which owns the Chargers, alienated most of San Diego with poor management, self-dealing, and farcical plans for new stadiums. (The final failed proposal—a combination of stadium, convention center, and “diversity-focused start-up incubator and accelerator”—was ridiculed as the “turducken” of stadiums). In their first two pre-season games in Carson, the Chargers haven’t been able to fill even the small 27,000-seat soccer stadium where they are temporarily playing.

Raiders owner Mark Davis inherited the team from his late father, Al Davis, a scoundrel who moved the team from Oakland to L.A. and back while suing everyone he could along the way. He may be the league’s poorest owner—though that could change when he moves to Las Vegas, which has foolishly devoted $750 million in public dollars to building him a stadium there.

And the 49ers? USA Today this year said owner Jed York had turned the team into “the NFL’s biggest joke.”

No wonder cities have been happy to see these owners leave. And life after NFL football looks pretty good.

San Francisco, sans the 49ers, is more prosperous than ever, and is using the land at Candlestick Point for new housing and mixed-use developments that will be more valuable than the stadium was. San Diego is still wrestling with the costs—and multimillion-dollar annual operations losses—of the Chargers’ old stadium, Qualcomm. But it is also starting to imagine the happier development possibilities of what could replace it.

And Oakland should find that the eventual departure of the Raiders from O.co Coliseum, as well as the exit of basketball’s Golden State Warriors from the arena next door to the Coliseum, opens up all kinds of transformational opportunities for a piece of land that sits next to a transit center and a short distance from the city’s airport.

But enough about the winners. NFL football in California is for losers. Pity the home teams.