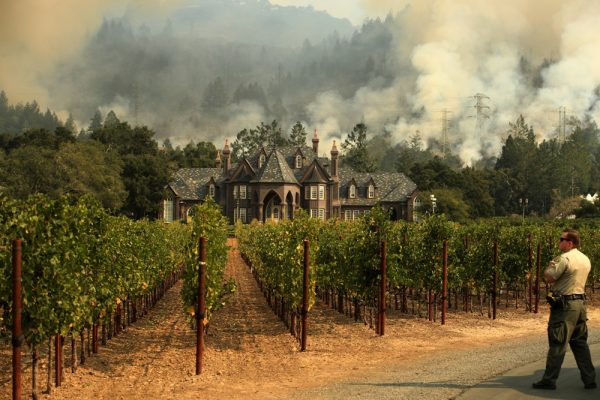 A wildfire burns behind a winery in Santa Rosa, California on Oct. 14, 2017. Photo courtesy of AP/Jae C. Hong.

A wildfire burns behind a winery in Santa Rosa, California on Oct. 14, 2017. Photo courtesy of AP/Jae C. Hong.The deaths and damage of this year’s Wine Country wildfires are a historic disaster. They are also the product of an epic California success.

That triumph is the growth of the wine industry, which has come to dominate our state’s land, culture, and image. Indeed, it’s now outdated to refer to the burning stretches of Napa and Sonoma counties as California’s Wine Country. The truth is that the whole state is Wine Country. And these awful fires—and the hotter fires that are to come as the climate heats up—will only make it more so.

Californians frequently fight over water, but we famously connect through wine. It’s a passion and pursuit that binds together rural and urban, business and labor, Hollywood and Silicon Valley (both of whose stars dabble in it), and rich and poor (we produce both $3,499.97 Screaming Eagle varietals and the $2.99 Charles Shaw wines they sell at Trader Joe’s). Wine is at once an export that defines us to the world (only three nations on earth—France, Italy and Spain—produce more wine than we do), and our leading home remedy, the best available balm for a state that dramatically inspires the sweetest of dreams and the most bitter of disappointments.

California is a state of disaster, and where there is disaster, you will find wine close by. Over the past 40 years, wine has boomed not only in Northern California—from 25 Napa Valley wineries in 1975 to more than 400 in Napa and Sonoma counties—but also in the Central Coast, the Central Valley, the Sierra Foothills, and even Southern California’s the Inland Empire. Much of this growth has come at the edges of cities and towns, in the space between human development and our wilder lands.

These are the places where California’s wildfires rage, and so the success of wine has lured many more people to live in more risky places. This era’s giant blazes have hit all our wine countries. In addition to the awful scale and human carnage of the Napa and Sonoma fires, multiple wildfires this summer did damage to the Central Coast, including its vineyards and wineries. And the current fires are only the latest disaster that wine has endured in California. Wine, like a vampire, has taken what might be mortal blows, such as droughts and depressions and Prohibition, and kept coming back stronger.

The history of wine in California is a century older than the state itself, and touches almost all of our most revered figures. California’s saint, Junipero Serra, had vineyards planted in the missions he founded in the 18th century. Los Angeles was originally a wine country (“The City of Vines” was an L.A. nickname of the 19th century), and the Napa Valley’s origins as a wine producer coincide with the Gold Rush.

By the late 19th century, wine was a major California export. And while wine is often seen as an artisanal exception to California’s newer industries, it actually established the template for the culture and economy that produced aerospace, movies, and software: People from all over the world bring their ideas and technologies to California, where they spin them together into new products that are then exported back to the world.

Long before there were tech incubators and venture capitalists, Californians were innovating with wine. Alfred Tubbs traveled to France in the 1880s to get important vine cuttings. Back here, he was among the first to plant root stocks that were resistant to Phylloxera, the disease that once destroyed Europe’s vineyards. If the name sounds familiar, it’s because the Tubbs Fire—named for its suspected origin near Tubbs Lane in Calistoga—was one of the major blazes destroying wide swaths of the Wine Country last week.

California also popularized wine as it did so many other products. In the second half of the 20th century, Robert Mondavi made wine the drink of the middle class, replacing bourbon and scotch, and soon every nook and cranny of space had a few vines. Now many Californians make their own, growing the grapes in their yards and stomping on them in their garages.

California has privileged wine to a degree that might embarrass your local aristocrat. Our state is famous for its high taxes, but makes an exception for wine. Our taxes on alcohol, a legacy of a powerful 20th-century liquor lobby, are so much lower here that Californians have gotten used to getting great wine at low prices—a bit of the Golden State’s largesse in every bottle. (In California, a $10 bottle of wine is pretty good. In the rest of the country it’s pink supermarket swill.)

In the aftermath of the fires, wine’s exalted status may come under pressure. Before the blazes, there had been conflict between wineries and their local governments and residential neighbors. Wineries often see housing development as encroaching on their land. Homeowners and local governments have complained about the traffic and noise that comes with the thousands of winery events and the 24 million tourists who visit the Northern California Wine Country each year.

Perhaps the tragedy of the fires will inspire new collaborations and smart, resilient planning to buffer wineries and houses. But if the fires create more limits on where structures—be they wineries or houses—can be built, more conflict is inevitable. The wine industry could also see internal turmoil and ultimately consolidation, as newer or smaller players, facing the high costs of rebuilding and insurance, sell out to bigger players. But look for wine to emerge stronger and win most of the battles—Californians like their wine more than they like other people’s houses.

The Wine Country fires reflect the unpredictability and cruelty of nature—amplified by any number of human failings in managing our environment. The fires will rightfully force a reassessment of those failings, at least for a while.

But human beings only can handle so much misery, at least by themselves. Eventually, we gather with others and reach for the bottle. And then, as has been practice since an ancient supper described in the Gospel of Matthew, the wine “is poured out to forgive the sins of many.”