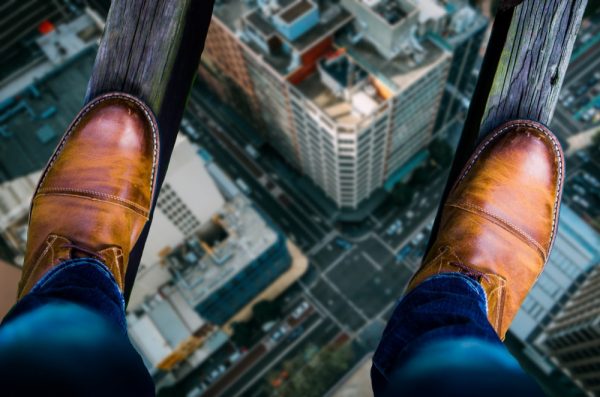 Don’t look down, California, look up! Our housing stock needs to be more vertical. Photo courtesy of Pixabay.

Want to spook your neighbors this Halloween? Don’t bother with big displays of goblins, ghouls, or ghosts. Instead, just decorate your door with a picture of an eight-story apartment building.

Californians are famously fearless in most things. We devote ourselves to extreme outdoor sports, buy homes near earthquake faults, and launch startups and make TV pilots against all odds. But in the face of tall buildings, especially multi-family residential high-rises, we turn into a bunch of scaredy-cats.

This statewide acrophobia has fueled a historic housing shortage that cuts into our incomes, holds back our economy, drives up homelessness, and forces us into long, unhealthy commutes. In other words, it’s downright frightening what our fears are doing to our future.

The case for taller buildings, especially in urban areas, is strong. Taller development creates badly needed housing on a smaller footprint, and thus the population density to support robust public transportation and thriving retail corridors. It also preserves open land for parks and agriculture. And, if the housing is near transit and job centers, it reduces traffic and pollution.

But California is laced with Munsters-era zoning codes that make tall, dense, or multi-unit buildings illegal in many neighborhoods. And, even where we permit residential towers, our frighteningly complicated processes for approving houses create so much litigation and so many delays that taller buildings become too expensive to finance.

To their credit, both cities and developers across the state have been advancing proposals for taller buildings, often in the dense centers where they’re needed. But smart plans are little match for the collective acrophobia of Californians.

If you dare, you can witness the plague of height fears right now in Long Beach, where citizens are revolting against a thoughtful city effort to update a three-decade-old land use plan to accommodate taller buildings. (This, in a place that is crippled, mummy-like, by a housing shortage.)

In Santa Monica, a new Expo Line rail connection should be encouraging taller development, but longtime residents, afflicted with the most haunting case of vertigo since Jimmy Stewart starred in the Alfred Hitchcock classic film of that name, oppose it. And in Hollywood, attempts to adopt a new community plan to accommodate high-rises have been blocked by relentless opposition from neighbors, judges, and ballot measures filed by a powerful nonprofit executive angry at what new towers might do to his views.

No California place is more firmly in the grip of the terror of the tall than Oakland. In response to sky-high housing prices that are displacing long-time residents, the city has permitted construction of thousands of units. But good luck getting them constructed in neighborhoods outside of downtown. Oakland has a backlog of 18,000 approved but as yet unbuilt units in its pipeline, many of which would be in taller buildings near transit.

How to stop the fear? The late Frank Herbert, a Northern California journalist better known for his Dune novels, wrote: “Fear is the mind-killer. Fear is the little-death that brings total obliteration. I will face my fear. I will permit it to pass over me and through me.”

When it comes to tall buildings, we should take his advice and face our fears. Instead, Californians construct elaborate and self-deceiving justifications for their acrophobic anxieties.

We tell ourselves that earthquakes make taller buildings less safe—even though studies show that poorly designed smaller buildings, subjected to strong ground motions, are more likely to collapse and hurt us. We focus too much on the upfront costs of high-rise multi-family buildings—which are more expensive to build than single-family homes because they required stronger materials—and ignore all the hidden costs of our fixation with single-family housing.

And we are highly selective in our fears. We fear the apartment building in our flat downtown more than the elaborate home surrounded by brush on a hill. We block tall buildings in our town centers because we worry about new crowds of new people—claustrophobia and xenophobia are cousins to our fear of heights—and then complain about all the resulting freeway traffic at rush hour. We oppose new housing on the grounds that it will change the character of our neighborhoods, and then lament the appearance of homeless encampments down the street.

Our fears literally distort our vision. Many Californians oppose tall and thin buildings, even though they actually are better for our views.

During a recent conversation, a prominent L.A. architect took out his smartphone. Holding the thin phone vertically, he explained that he could design a tall and thin building that is easy to see around. But because of fear of heights, he said, turning the phone horizontally, buildings are often made much shorter and squatter, effectively becoming walls that block more views of more people.

“We’re building a bunch of fat boys,” he lamented.

Which is too bad, because the few areas of California with high-rise housing are successes. Fear somehow has blinded us to the vibrancy of high-rise-heavy precincts in the downtowns of L.A. and San Diego. And the benefits of pursuing a taller, denser housing future, particularly in coastal urban areas, would be considerable: higher annual economic growth, more tax revenue, and fewer greenhouse gases.

But it’s hard to have a conversation about this fear when there is so much else for Californians to be afraid about now, from a spike in property crime in the state to the nuclear-armed madmen who run Pyongyang and Washington.

The current gubernatorial campaign might provide an opportunity for reassessing the altitude of our development. The top two contenders, Gavin Newsom and Antonio Villaraigosa, pushed to make their cities more vertical when they were mayors of San Francisco and Los Angeles, respectively.

But both got hammered for doing so. And now the two former mayors are surrounded by protective political professionals who, when it comes to the highest and hardest issues, are perpetually scared to death.