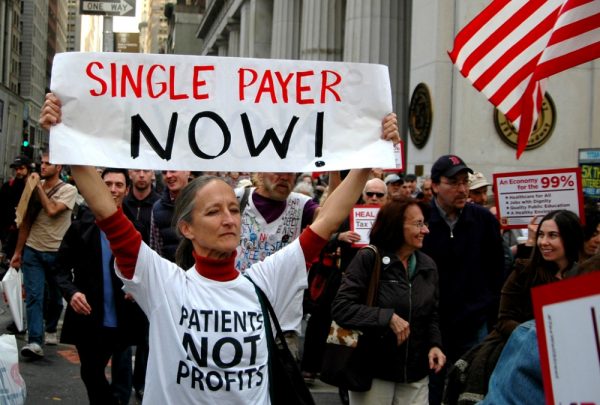 A single-payer sign at a rally. Photo courtesy of Michael Fleshman/Flickr.

I really should be 100 percent supportive of the effort to establish a single-payer health system in California. Because all the best Californians are for it.

California’s next governor, Gavin Newsom, has made single-payer a central tenet of his campaign. America’s next president, California U.S. Senator Kamala Harris, just sprinkled her stardust on it, declaring that single-payer was the “morally right” and “smart” choice.

So why do doubts keep springing to my diseased mind?

Maybe, as a homely former newspaperman, I carry bias against beautiful, camera-ready people like Newsom and Harris. But it’s not just them: Behind-the-scenes powers in our unions, our non-profits, and in the Democratic Party will tell you that California needs to take the extraordinary step of adopting its own single-payer plan right away.

And so they are making it the number-one litmus test in California civic life. If you want to run successfully for office in California, or even attend cool parties in our coastal counties, you had better support single-payer. Any officeholder who doesn’t support faces recall and bullying on Twitter.

I am sympathetic to this uncompromising line. This is not just a question of health. It’s a choice of good vs. evil, not to mention Trump vs. California. Faced with a nihilistic president and GOP hell-bent on tanking our existing health care system, so that they can appear to have repealed Obamacare, the only defense is a similarly hell-bent destruction of the system, via single-payer. Not only that, but we are duty-bound to save the rest of the country, because once the Golden State succeeds with single-payer here, the concept will take over the country, just like the Kardashians did.

Given all this, I must confess that sometimes, in dark moments, I wonder whether single-payer is just a political weapon for one group of interests and politicians to use against another. But how can I think such a cynical thing when President-in-Waiting Harris recently assured us—as she co-sponsored single-payer legislation that would protect you from health insurance by making it illegal for your employer to provide it to you—that single-payer “is a nonpartisan issue”?

Now when I heard her say that, I thought: Haven’t Americans been fighting in bitter, partisan ways over healthcare for 100 years? But then I realized that was unfair and that Harris is right: A century is but a blip in the vastness of space-time.

Now, before I perform even more self-flagellation in this column, let me explain what single-payer is: a system that uses taxes to pay for healthcare for all people. That’s different from the current healthcare system here, with its mix of insurance companies offering employer-subsidized policies and three government-subsidized individual insurance plans—Obamacare, Medicare, and Medicaid. Now, I admit that I can get bogged down at times in current realities. And I ponder—like a fool, I know—how well a single-payer system, with a one-size-fits-all structure, might work in practice in a big, complex state like California. Then I wonder—I’m so ashamed—if it might be easier to expand and better fund the current system—getting employers and governments to cover everybody. I sometimes secretly read reports about other countries that have private insurance and still guarantee health care for everybody.

Then I get really dark. And I remind myself that one-third of all Californians today, and half of all California children, are on Medi-Cal, California’s version of Medicaid, which means the government pays for their health care. But many of the people in this smaller version of single-payer struggle to get they care they need because there aren’t enough doctors and institutions that will serve them.

Then I start thinking about money—Money! For shame!—and wonder: Why doesn’t the proposed single-payer legislation in California and in Congress explain how you pay for the care—or control costs as you must in a single-payer system?

And while I know I shouldn’t do this to myself, I read estimates that a single-payer healthcare system in California alone would cost $400 billion, which is two-and-a-half times the size of the state general fund.

That gives me an anxiety attack, since raising taxes requires a two-thirds vote of the legislature, which can be somewhat difficult. And then I worry—I’m not proud of this—about my kids’ schools. The two big pieces of the state budget are education and health care, so when you see a big run-up in spending on health, the schools get cut, and teachers get laid off and instruction time gets cut.

But then I get a hold of myself, and listen to Bernie Sanders (who like all Vermonters really knows California deeply), and I stop worrying.

I mean, California’s schools already do remarkably well with some of the lowest funding levels of any state in the country. So why would it matter if they’re cut further? And since everyone will be so much healthier under single-payer, the teachers will be able to teach more kids in less time, and the children will learn faster!

And, after listening to single-payer advocates, I’m sure that this single-payer healthcare will save money, because all the money we spend on insurance and pharmaceuticals will just be replaced by new taxes, and the resulting efficiencies will create some savings. (Don’t sweat the details). And while there may be startup costs, this is California, with an economy the size of France’s. We’ve got money. If the taxes don’t come through at first, we’ll run a Kickstarter campaign. Or make Mexico pay for it.

Since having those realizations, I’ve been totally behind single-payer—with the exception of one bad bender of doubts. My trigger for that episode was the housing crisis.

I had just visited homeless encampments, and was reading a UCLA Anderson report about how far behind we are in meeting Californians’ housing needs. Then I saw the news that, spurred by rising homelessness, Los Angeles and San Diego counties now have Hepatitis A outbreaks that constitute public health emergencies.

And I couldn’t stop myself from thinking: How can these fancy people running our state be talking about some pie-in-the-sky single-payer when they’re failing to provide Californians with the most basic piece of the healthy life—shelter?

But then I realized I was shifting the blame for too many ills to single-payer. Is it single-payer’s fault that the California politicians who support it have made it nearly impossible to build affordable housing?

I also recognized I was stuck in the past. Just because our systems for education and housing haven’t produced nearly enough of either doesn’t mean that single-payer healthcare won’t produce enough healthcare.

Then it hit me: All my doubts about single-payer are really a form of illness, and that illness is itself the best possible argument for single-payer.

Because clearly, I’m sick in the heart and in the head. And if there were a cure, I couldn’t afford it.

So bring on single-payer. I’m sure it will fix me, and good.