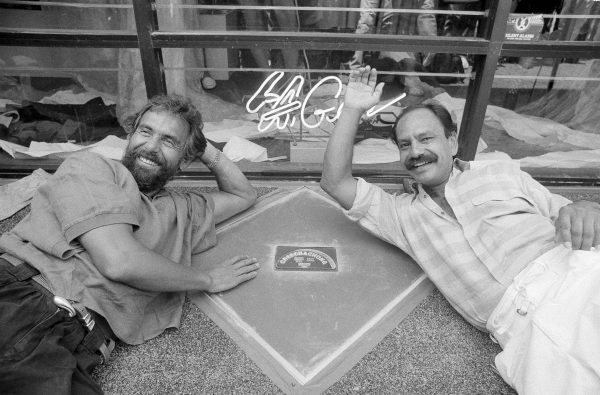 Richard “Cheech” Marin (right), and his cohort Tommy Chong, clown around as they pose with their “Bronze Taco” award on a Los Angeles sidewalk, July 20, 1984. Photo courtesy of Doug Pizac/Associated Press.

This week, California should give thanks for Cheech.

Richard Anthony Marin deserves our gratitude not just because his new autobiography, Cheech Is Not My Real Name … But Don’t Call Me Chong, turns out to be the best California book of the year. And not just because his career should give you hope that no matter how short, bald, or brown you are, you can be a star.

The biggest reason to thank Cheech now is that his life embodies Thanksgiving itself: a big, robust meal that includes many different flavors but is ultimately for everyone. This California entertainer’s decades-long persistence at the center of our culture reminds us, happily, that our state’s cultural mainstream is so much more interesting and inclusive than we acknowledge.

Indeed, Cheech is evidence of a California paradox: To stay in the mainstream here, you have to be something of an outsider. To achieve Cheech-level ubiquity in a place as big and diverse as this, you have to cross lines, rather than respect them.

In the case of Cheech, this is all the more so because he is most often identified as a “cult” figure—best remembered as one-half of the stoner comedy team, Cheech and Chong, that produced hit comedy records and the 1978 film Up in Smoke. But his career has been much bigger and more mainstream than that.

Indeed, the dirty secret of Cheech’s life, as he tells it, is just how much of a square he’s been. Marin was a middle-class kid who saw two sides of L.A. He spent his early years in African-American sections of South Central Los Angeles, where his parents had gone to high school. His father was an LAPD officer; his mother was president of the PTA. But by his teens, the family had relocated to a white neighborhood in the San Fernando Valley.

Racially and ethnically, he was an outsider in both places, so he coped by doing everything he could to fit in. The future stoner actor-musician-writer-comedian was a Cub Scout, a Boy Scout, an altar boy, and “a little wiseass who got straight A’s,” first at Catholic schools and later at San Fernando Valley State College (now Cal State Northridge). Marin describes himself as an educational traditionalist, stumping for the values of the classic liberal arts education. He even worked in aerospace during college, manufacturing airplane galleys at Nordskog.

The book’s signature moment—recounted by Cheech as the Apostle Paul might have recalled his trip to Damascus—is when he smoked marijuana for the first time, and found that the allegedly mind-rotting substance expanded his perspective. He thought: “What else have they been lying about?”

And with that, he discovered art, awakened politically, dodged the draft, went to Canada, met former musician Tommy Chong, and began playing shows all over the world. The rest is California history. Lou Adler started managing him, he bought a house in Malibu, and even practiced Transcendental Meditation, as taught by the Maharishi Mahesh Yogi.

Cheech proudly identifies as Chicano and Latino, and sees his heritage as bridge, not niche. The glory of being Latino, in his telling, is that you are part of a demographic that is itself so diverse as to contain multitudes.

“My face has some kind of international malleability to it. Add your own preferences or prejudice to it, and I could be anything,” he writes, before sharing a successful romantic strategy in which he told women he was “Dutch Indonesian.”

But narrow-minded Hollywood types couldn’t see his natural breadth at first, and sought to pigeonhole him in narrow roles. Marin countered by writing his own material, most successfully in the 1987 film, Born in East L.A. The movie is quintessential Cheech—a comedy that frames the Mexican-American story as fundamentally American, and demonstrates the absurdity of trying to put people in boxes.

(Its humor holds up far too well. Marin’s character, an American citizen and native Angeleno, gets caught up in an immigration raid and mistakenly deported back to Mexico, where he is a fish out of water. Today, that comic premise is a nasty reality: The federal government has been mistakenly deporting thousands of American citizens annually, according to the Deportation Research Clinic at Northwestern University.)

Marin’s other strategy was to find roles in the most middlebrow TV, movie, and musical productions and make them his own. He did a spin-off of The Golden Girls. (“When the opportunity came to be in a very, very mainstream, down-the-middle-of-Middle-America show, I jumped at it,” he was quoted as saying at the time). He also made a successful children’s album, and became a regular player in Richard Rodriguez movies.

He has touched most stations of the California cultural cross. For years, he co-starred with Don Johnson on the high-ratings police drama Nash Bridges, which was set and filmed in San Francisco. Marin loved the city so much that he moved his family there, and developed a golf jones from sneaking away from the set with Johnson to play Pebble Beach.

He also found time to appear in the premiere of a Sam Shepard play, The Late Henry Moss, opposite Sean Penn at San Francisco’s Theatre on the Square. And he turned himself into a regular voice in the animated films of Emeryville-based Pixar films, most notably as Ramone in the Cars films. He also showed up as Banzai in The Lion King.

Marin is unapologetic about mainstream success. His book includes an entire chapter on how he outsmarted Anderson Cooper to become the champion of Celebrity Jeopardy. And by his account, his old partner, Tommy Chong, is a cautionary tale, whose career founders because he was not willing to evolve to reach audiences.

“I have no hard feelings about the journey,” he writes. “We’ve been successful and made a lot of people happy. I just wonder why we were so hard for people to see for so long.”

Marin has made news recently as a leading collector and public champion of Chicano art. The City of Riverside has proposed to turn over its main library—across the street from the historic Mission Inn—for the Cheech Marin Center for Chicano Art, Culture, and Industry. Marin, ever mainstream, emphasizes that, “Chicano art is American art.”

Despite his cult status, it’s hard to call Cheech countercultural now. The man who performed his most recent marriage, former Mayor Antonio Villaraigosa, is a leading candidate for California governor. And on January 1, 2018, recreational marijuana will become legal in his home state. The counterculture has become the mainstream, and Cheech has one foot in both. Isn’t that the California dream?

Now that Cheech is an institution, maybe it’s time to honor him as one. Perhaps California could have its own version of Mt. Rushmore; the natural spot to chisel out the faces of Golden State greats would be in the Granite Mountains, a small range in the Mojave Desert.

There would be many great candidates for this pantheon. But why not start by carving the old stoner in stone?