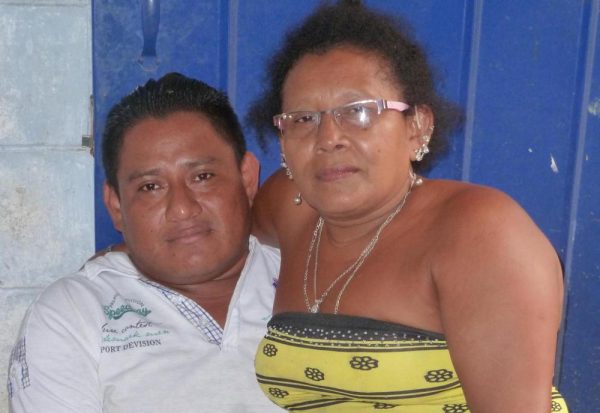 Julio Baldelomar and Aryeri Rodríguez in their new home in Managua. Photo by Douglas Haynes.

On an overcast afternoon, Julio Baldelomar carries his metal ring of bagged chips past a new tourist attraction called Paseo Xolotlán, named for the nearly Los Angeles-sized lake on Managua, Nicaragua’s north side. Families flock to the high-walled complex to see a miniature replica of old Managua and walk on the waterfront promenade. But 31-year-old Julio is not allowed to enter while he’s hawking the plantain and yucca chips that his family makes.

“The government has made a disaster,” he says. “You can’t go in and sell here, because it’s privatized.”

To his chagrin, construction of new attractions continues for a mile along the lakefront. He sells a bag of chips to a brown-uniformed guard at the gate of a building site. Behind the gate, leveled earth stretches along the lake to where Julio squatted in a sheet metal shanty before a 2010 flood displaced him and his partner, Aryeri.

“The tragedy,” he calls the flood.

In his memory, their lakefront home remains an oasis. He recalls the plants that grew in Aryeri’s garden as if saying their names could bring them back: olives, ten o’clock flowers, papayas, passion fruit, mango, hog plum, chili peppers.

At the gate, Julio convinces the guard to let him walk across the construction site. “What a disaster!” he says when he enters the site. Heaps of brush are piled around the few trees that remain. Potable water from a broken pipe streams toward the lake. The square outlines of house walls mark the bare, burnt-umber soil blazed with bulldozer tracks. A crumpled yellow T-shirt, a pair of underwear, and a shredded green plastic cup top a mound of dirt.

There’s nothing else left of the barrio that Julio haunted when he lived on the lakefront. In October 2014, civil defense forces forcibly evacuated about 300 families from the site, though they weren’t in imminent danger. Some wanted to leave, some didn’t. They were all taken to a nearby emergency shelter, ostensibly because of the barrio’s vulnerability to flooding. Many claim that the government cleared the barrio only to develop the lakefront, repeating a process of sacrificing poor people’s homes for profit that happens all too often around the world. But in Managua, most of the nearly 30,000 people displaced between 2010 and 2014 were voluntarily evacuated, fleeing floods, landslides, and crumbling earthquake ruins. 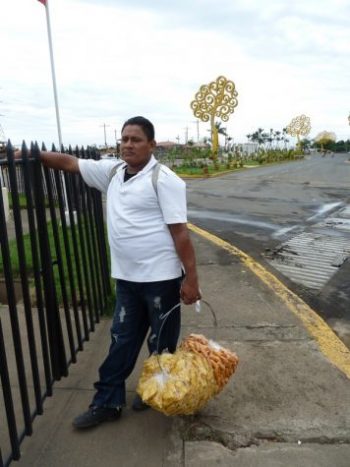 Julio Baldelomar vending on the lakefront in Managua. Photo by Douglas Haynes.

Next to the stream pouring from the broken pipe, a girl wearing baggy black shorts and a black T-shirt many sizes too big pounds a sledgehammer at a slab of concrete. Her curly, dark hair is flecked with crud, and the bridge of her nose bears a dirty scab. Her feet barely cling to green plastic sandals with holes in both heels.

Julio approaches the girl, grabs her sledgehammer, and starts swinging it at the concrete. It’s about a foot thick and deeply entrenched in the soft earth next to the stream. The job is too big for the nine-year-old girl, who is only twice the height of the sledgehammer.

Julio heaves and swings the hammer over and over. His green canvas backpack sways as the head hits the concrete with the full force of his considerable girth. Gradually, the concrete breaks into smaller pieces, revealing several long pieces of rebar. But the steel the girl is seeking to sell for scrap is stuck in the ground. He’s about to give up. Sweat glosses his bronze forehead and drips from his nose. He grabs a white rag out of his pocket and wipes his face. He sets the sledgehammer down, plants his boots firmly, and tugs and tugs on the rebar. He almost falls into the stream. The earth won’t loose the steel.

Then something miraculous happens. A bulldozer driver steers his machine over to Julio and opens the cab door to buy a bag of chips. Then he motions for Julio and the girl to get out of the way. The driver lowers the blade into the soil below the concrete and pushes the slab into the air. But the ground still doesn’t let the steel go.

As the bulldozer backs away, a digger with a bucket loader drives over and takes a swipe at the concrete. It only needs two swipes to loosen the concrete and long rebar from the earth. Julio whacks the sledgehammer at the remaining bits of concrete clinging to the rebar. Within minutes, he has removed nearly all of it. The girl beams.

Julio sees himself in the girl. He used to forage the city for scrap metal as a child, too. The girl will get 20 or 30 córdobas for the rebar, enough to quell her hunger with some tortillas and a soda.

Julio lopes away in his ripped jeans toward the neoclassical towers of Managua’s old cathedral, hollowed out in a 1972 earthquake that killed at least 11,000 people, left hundreds of thousands homeless, and leveled 10 square miles of the city’s heart. Managua has never recovered. Squatter settlements sprang up in the ruins of what was once Central America’s most cosmopolitan downtown. Tons of rubble were dumped in the lake where today’s recreation areas are being built and squatters are being swamped. One disaster has covered another. Despite decades of grandiose plans for urban revitalization, the poor still scrape the city’s margins for the dregs of Nicaragua’s stuttering economy.

On the other side of the cathedral, in the shady Parque Central, Julio washes his arms and hands under a tap in a fountain. He sells a few bags of chips, asking each customer if they want hot sauce. Dusk dims the park. Parakeets roost in the treetops.

After dark, he gets a bus home and walks through the blue door of the new concrete house he shares with Aryeri. It’s the first home either of them has ever had with a legal title, a bathroom, and a floor that isn’t dirt. When the flood drove them from the lakefront, they lived 16 months in an emergency shelter’s dark cubicle. Then the Nicaraguan government gave them this furnished, three-room house in a community for flood refugees. Julio bought plants for Aryeri, and now she tends a new garden, lush with ferns and a red-flowering living fence.

The couple now worries less about Managua’s torrential rains drowning their home, though the rains’ growing intensity and the city’s rapid expansion cause the metropolis to regularly flood. They’ve left the community of squatters who make up about one-quarter of Managua’s residents. But Julio still prizes the camaraderie of street vendors and scavengers he grew up with, and the government’s takeover of the lakefront looms like another deluge for his income.

Before Julio had gone out vending in the morning, Aryeri sat down on his lap. He squeezed her with both arms. Their faces glowed. Julio’s black hair was slicked-back; Aryeri’s frizzed in every direction. She rubbed Julio’s round belly.

“Your cooking is how I got it,” he joked.

He doesn’t have to scavenge for scraps to survive anymore. But he still knows how to find them if need be.

Douglas Haynes is a nonfiction writer and poet whose work has appeared in Orion, Virginia Quarterly Review, Longreads, Boston Review, and many other publications. He teaches writing and literature at the University of Wisconsin Oshkosh. This piece is adapted from his book Every Day We Live Is the Future: Surviving in a City of Disasters, out now from University of Texas Press.