What Californians Can Learn From South Korea’s Nuclear Cool 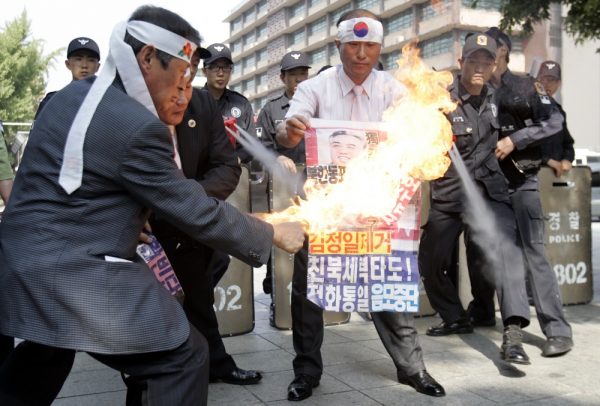 Can Californians learn to be as cool as Koreans in the face of nuclear annihilation?

Seoul’s regional population is now 25 million, about half of the country’s total population, and so South Koreans have been living productively under North Korea’s threats for more than six decades. But for Californians, being North Korean targets is disorientingly new—because of the regime’s recent advances in developing both nuclear warheads and intercontinental missiles that might be able to reach Disneyland. North Korean propaganda has sown fears with specific threats against California and even animations of nuking San Francisco.

These threats have been amplified by President Trump’s thoughtless provocations of the North—his pledge of “fire and fury like the world has never seen” seemed to welcome nuclear war—and by more official warnings in California. The L.A.-area Joint Regional Intelligence Center issued a bulletin last summer urging state and local officials in California to update nuclear attack response plans. The bulletin also included scary details, including how, post-mushroom cloud, your pets might carry enough radioactive contamination to kill you.

Arriving in Seoul a little jittery (my mother asked me if I really had to go), I found people in Seoul to be profoundly reassuring, especially considering that North Korea has its ground forces and thousands of pieces of artillery positioned near the border, just 35 miles to the north.

“Keep calm,” I was advised over again, with some citing the World War II-era British advice to “Keep calm and carry on.” In bars, patrons swapped out “and carry on” for “and drink beer”—a popular meme that nods to the Korean passion for spirits.

It’s also hard-won wisdom that Californians should adopt: To avoid war with a volatile neighbor for 60 years, you can’t lose your temper or your head. Indeed, the deepest worries I heard from South Koreans involved the reliability of President Trump, and whether he was truly committed to honoring the longstanding ironclad American commitment to protect South Korea even if it means risking an attack on the U.S. mainland. The North Korean strategy of escalation—through nuclear bomb and missile tests—is often seen as posing a question to the United States: “Are you willing to trade Los Angeles for Seoul?”

But that question, while linking the fates of California and Korea in a frightening manner, is seen as mostly rhetorical in Seoul, a city so economically and culturally vital that its destruction is almost unthinkable.

Instead, South Koreans see the current conflict cynically—as a contest between a dictator, Kim Jong Un, and a reality TV-authoritarian, President Trump, who both use threats to rile people up in service of keeping power, so they can enhance their personal wealth. So why play into their hands? One Korean scholar, boasting that his country had impeached its own corrupt and crazy president, Park Geun-hye, back in March, asked me if the United States might follow Korea’s lead and do the same.

Rather than give in to authoritarian madness, locals say it’s better to behave nonchalantly. That’s why South Korea’s new president Moon Jae-In went on vacation after the North launched an intercontinental ballistic missile this summer. The news media reinforces such sanguinity; last week, stories about shake-ups in Korea’s business world, rising Seoul housing prices, the upcoming Winter Olympic Games here in February, and efforts to tackle the social problems of suicide and “spy-camera pornography” got more notice than the possibility of a nuclear exchange.

During a daylong conference I attended on the future of Korean democracy, North Korea got mentioned exactly once. When I asked Monk Ji-Sun—the president of Korea Democracy Foundation, which protects the history of Korea’s democratization and promotes a more democratic future—about the situation, he argued that the best strategy is to ignore the threats and machinations of other powers and focus on developing the country’s own institutions instead.

To be sure, South Koreans are making some defensive preparations, and even discussing the possibility of nuclear weapons. In August, the government conducted a large-scale civil defense drill, though it wasn’t taken particularly seriously. And I met a few Koreans who admitted to having packed bags at home just in case of attack, with many of the items—cash, identification, water, food, first-aid supplies—that Californians assemble in their own earthquake kits.

One afternoon, I had coffee with Leif-Eric Easley, who grew up in Long Beach and now lives with his wife and two children in Seoul, where he is a professor at Ewha University. An expert on international relations and Northeast Asia, Easley argues that North Korea’s provocations are meant to divide its neighbors, so not rising to the bait is a good strategic response.

Easley says that Koreans stay cool in the face of threats because they understand the situation well, and knowledge reduces fear. But the risk of war is not zero, and he sees a certain desensitization to the war threat. After North Korea’s sixth nuclear test in September, the parks were so full of Koreans enjoying good weather and beer that his family found it hard to find a place to picnic. Part of this lack of fear is generational—the Koreans who remember the horrors of war are dying, he noted.

After our conversation, I walked by the U.S. Embassy, where I encountered competing protests—one a “No Trump Zone” that called for the pursuit of peace with the North, and the removal from South Korea of an American missile defense system known as THAAD (Terminal High Altitude Area Defense). The smaller counter-protest urged a pre-emptive American strike on the North: “You Bomb North Korea. We Support You.”

Both protests were tiny compared to two nearby events. Several hundred Koreans, mostly in their twenties, were attending a job fair, a familiar scene in a wealthy country struggling with high youth unemployment. And a short walk away, in Gwanghwamun Plaza, thousands of young people gathered to watch a rehearsal for an upcoming Olympic-themed concert by the K-pop group Twice.

The nine young women in the group were singing their huge hit, “Cheer Up.” It’s about dealing with an anxious boyfriend who keeps texting his love, escalating in desperation to something that might sound threatening.

But the chorus offers some good advice, to girlfriends and Californians alike: Stay cool and de-escalate the confrontation. “I’ll act calm,” Twice sings, “as if it’s nothing.”