Why the Planet Should Fear North Korean Nuclear Testing 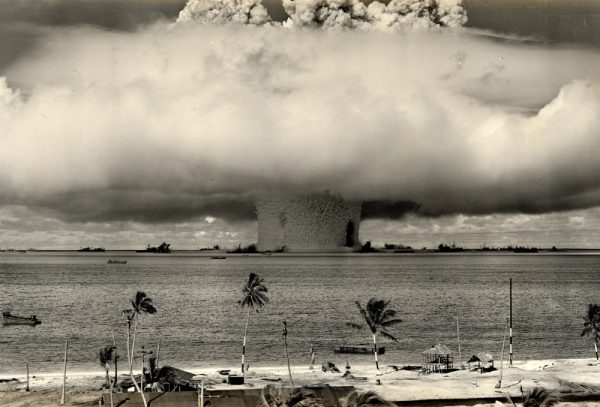 A nuclear weapon detonates at Bikini Atoll in the Marshall Islands. Photo courtesy of James Vaughan/Flickr.

The North Korean threat to launch another missile, this time with a nuclear warhead, fostered Japanese concerns ranging from the safety of their food supply to the survival of their nation. The current crisis has once again revived the same fears that inspired the story of Godzilla (Gojira) early in the atomic age. More recently, radiation escaping from the Fukushima nuclear disaster, triggered by the massive earthquake and tsunami of March 2011, contaminated the surrounding sea, crippled the economies of many Japanese fishing villages, and threatened health and ecological damage for decades to come.

Early in the Cold War, the plight of 23 Japanese fishermen inspired international efforts to ban atmospheric nuclear testing. In 1954, the United States conducted what remains its most powerful nuclear weapons test, code-named BRAVO, at Bikini Atoll in the Marshall Islands. A calculation error resulted in an explosion almost three times larger than scientists had anticipated. The 15-megaton blast, about 1,000 times larger than the bomb dropped on Hiroshima in 1945, combined with an unexpected shift in the wind direction to spread clouds of radioactive ash well beyond the announced international exclusion zone. Transiting outside of that zone, but only 80 miles from ground zero, fishermen aboard the Japanese boat, named the No. 5 Lucky Dragon (Daigo Fukuryū Maru), were showered with radioactive ash from atomized coral of the atoll.

Widespread anxiety broke out in Japan when the crew, suffering symptoms consistent with radiation exposure, returned to their home port. Soon thereafter, panic spread with reports of radioactive tuna appearing in Japanese fish markets. The massive size and resulting fallout from the BRAVO test prompted a wave of international condemnation, including statements from Pope Pius XII, the humanitarian Albert Schweitzer, and Indian Prime Minister Jawaharlal Nehru, who appealed to the United Nations for a moratorium on nuclear testing.

The resulting international debate over atmospheric nuclear testing contributed to the politicization of scientific data now familiar via the controversy over climate change. In both cases, powerful bureaucrats at the highest levels of the U.S. government dismissed empirical evidence and rejected the international consensus on a global environmental issue to pursue national objectives. In the 1950s, an international scientific consensus held that atmospheric nuclear testing posed unacceptable health risks not only to those “downwinders” exposed to radioactive fallout, but also to citizens across the world. Atmospheric tests sent strontium-90, a substance with a half-life of 28 years, into the stratosphere, where jet stream winds spread the radioactive particles for up to a year before they descended to earth and contaminated the food supply.

U.S. government officials initially dismissed the mounting international outcry over its atmospheric testing program in the Pacific as hysterical, unwarranted, and threatening to American national security. Lewis L. Strauss, Chairman of the U.S. Atomic Energy Commission (AEC), and physicist Edward Teller, the so-called “father of the hydrogen bomb,” insisted that atmospheric tests were essential to maintain the nation’s strategic superiority, and asserted that the cumulative effect of atmospheric tests conducted to that point posed less of a health hazard than a single dental X-ray. Moreover, they contended that those scientists who argued otherwise were either communist sympathizers or dupes of communist propaganda. A decade later, Strauss, still convinced of his claims, was pressing the CIA for evidence that Soviet agents planted irradiated fish in Japanese markets to intensify international protests against U.S. nuclear testing in the Pacific.

As complex medical debates continued over the genetic hazards of nuclear tests, the United States sought to minimize international scorn by conducting many of its atmospheric tests in the Nevada desert at a test site 65 miles north of Las Vegas. By 1959, high levels of radioactive strontium-90 appeared in Minnesota wheat crops, finally convincing President Dwight D. Eisenhower that the comforting assurances of his governmental scientists had proven false. Fending off persistent requests from the AEC and the Department of Defense to conduct additional tests, Eisenhower maintained a unilateral moratorium on atmospheric testing through the end of his presidency and initiated negotiations that his successor, John F. Kennedy, concluded in 1963 with the signing of the Limited Test-Ban Treaty.

The treaty spared the world the hazards of fallout from nuclear tests, prohibiting tests in the atmosphere, under water, and in outer space. It permitted, however, continued testing underground, where tests were less easily monitored and detected. In the end, the treaty proved more beneficial in protecting human and environmental health than in slowing the nuclear arms race, as testing simply continued unabated underground.

Today, the troubling threat from North Korea’s foreign minister, Ri Yong Ho, that Pyongyang may conduct “the most powerful detonation” of a hydrogen bomb over the Pacific Ocean renews concerns over the multiple perils of atmospheric nuclear testing.

Thus far, North Korea has tested separately its ballistic missiles and its nuclear weapons, with its previous nuclear tests occurring underground. Japanese broadcaster TV Ashari recently reported that an underground section of North Korea’s Punggye-ri nuclear test site collapsed after its sixth and largest test on September 3, perhaps killing as many as 200 people. (North Korea dismissed the report as “misinformation.”) South Korean scientists fear that any further tests would risk collapsing the entire test site, a network of tunnels deep under the 7,200-foot Mount Mantap, and triggering a leak of radiation that would drift across the region.

Although North Korea may still have access to other entrances and underground cavities within its test site, it may take considerable time to excavate for another test. Kim Jong Un’s desire for a provocative act to punctuate his war of heated rhetoric with President Donald Trump may be pushing North Korean scientists to test elsewhere, perhaps in the Pacific.

A North Korean test over the Pacific would be even more dangerous than the closely-controlled and openly-announced U.S. tests of the 1950s. Several of North Korea’s previous missile tests failed, either on the launch pad or veering considerably off course, raising the risks that a future missile test may detonate its nuclear warhead in a populated area of Japan or elsewhere. Although several early U.S. ballistic missile tests in the 1950s and 1960s also failed, American scientists had in place numerous safety mechanisms that prevented the warheads from accidentally detonating when the missiles malfunctioned. The extent of North Korea’s safety mechanisms remains unclear.

Moreover, it is doubtful that North Korea possesses a strong enough navy to identify, announce, and secure a sufficiently-sized impact area in the Pacific. Conducting such a test would not only place ships, aircraft, and populated areas in harm’s way, but it would also be a terribly risky strategic gamble.

The effort to prove that North Korea possesses the capability to strike the United States with a nuclear-armed missile requires solving the incredibly difficult and separate technological obstacles associated with developing a miniaturized nuclear warhead, protecting it from the tremendous heat and instability upon reentering the earth’s atmosphere, and making it accurate enough to hit near its designated target.

Even if a successful test demonstrated that the North Koreans had solved those tasks, it would also provide the United States and other powers with intelligence about its design, yield, accuracy, and vulnerabilities far more detailed than could be discerned from an underground test. In proving its capabilities and providing a measure of deterrence, such a test would provoke international outrage and deepen the nation’s isolation.

The chances for error when conducting such tests are so great that few nuclear powers have accepted the risks. Of the more than 200 atmospheric tests that the United States conducted between 1945 and 1963, only a handful included warheads attached to ballistic missiles. The last occurred in 1962, when the United States detonated a 1.45 megaton weapon at a high altitude about 900 miles from Honolulu. Nuclear detonations at high altitudes generate and disperse fewer toxic particles from irradiated ground material, but still produce a powerful high-altitude electromagnetic pulse (HEMP), capable of destroying electronic devices, crippling power grids, and damaging nearby satellites in orbit.

China, a nation that joined North Korea in refusing to sign the Limited Test-Ban Treaty, fired in 1980 what experts believed to be a nuclear-tipped ballistic missile into a remote desert region about 1,300 miles west of Beijing. It generated such international condemnation that China remains the last nation to have tested a nuclear-tipped missile in the atmosphere. Citizens of the world, especially fishermen in Japan, tensely wait to see if North Korea will be the next.

Benjamin P. Greene is an Associate Professor of History at Bowling Green State University and the author of Eisenhower, Science Advice, and the Nuclear Test-Ban Debate, 1945-1963.