To Be Blunt, California’s Marijuana Industry Is Stoking High Anxiety 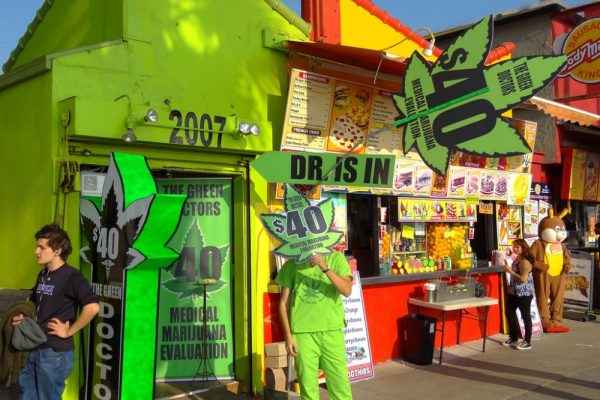 It’s so lucrative being green—especially in the Golden State. A “medical marijuana evaluation” station on Venice Beach. Photo courtesy of Adam Jones/Flickr.

When January 1 rolls around, California will not merely be permitting adults 21 and older to buy marijuana for recreational purposes. The state and its cities also will be scrambling to create a new and wickedly complicated regime to regulate and tax cannabis.

Coming high times will have high stakes: The legalization of cannabis in America’s largest state, if carried off well, represents an opportunity to end the war on drugs that still rages in the United States, with the cops catching far more poor people than preppies.

But if this transition turns messy, the Trump administration—which is devoted both to debasing California and promoting thoughtless “law-and-order” policies—could bogart everything by stepping up arrests and criminal penalties for drug violations.

Smoking weed is said to expand your mind, but I’m not sure if there is enough marijuana in the state for anyone’s brain to comprehend the complexities of all the new rules, much less figure out how best to enforce them.

The paradox of legalization is that it requires moving a $7 billion industry—that has long gone unregulated by the state, and benefited from that status—into a highly regulated structure, with extensive taxes and permitting. California governments that once took a live-and-let-live approach to cannabis now find themselves having to boost enforcement against cannabis businesses to make sure that companies move out of the black market.

Such policing requires a difficult mix of tight and carefully balanced enforcement. If regulatory compliance is too loose and taxes and permits are too cheap, scofflaws could plague the new industry. If they undercut the prices of the legit sellers, they might make the drug all too available to children. But if regulatory compliance is too costly and taxes and permits too expensive, too many firms might choose to stay in the black market.

At this point, it’s hard to be optimistic that California’s governments will find that balance.

Among the challenges: The state has been slow to issue regulations to create an interconnected framework of rules covering both newly legal recreational adult use and medical use, which has been legal since 1996 but poorly regulated.

Then there are California’s cities—which have tremendous discretion in whether to issue permits, but are in many cases still debating what to do. Those municipalities that have issued rules are creating so many different standards—some cities ban marijuana businesses of all kinds, while others might permit certain dispensaries, distribution, or labs—that California’s cannabis market will resemble a crazy-quilt.

The federal government is also undermining the transition. By maintaining its prohibitions of marijuana, it is creating both legal jeopardy for those in the legal industry and real difficulties with banking, since few financial institutions will serve businesses selling a product that the United States considers to be an illegal drug. In an acknowledgment that cannabis is likely to remain a mostly cash business, State Treasurer John Chiang has offered to provide armored cars so that cannabis businesses can transport their money when they pay taxes.

Because the industry is badly undercapitalized, it has yet to build out the infrastructure—from compliance systems to lab testing to a strong distribution system—necessary for its new regulated reality.

While attending three different conferences on cannabis this fall, I was struck by the high anxiety around the conundrum of making a business legal without ending up in trouble over the new rules. These days, marijuana business owners sound a bit like homebuilders—utterly frustrated at the endless delays and NIMBY politics that make it so hard to get permits from California’s local governments.

Many businesses, as they struggle with uncertainty, are coping by devoting themselves to California’s ultimate drug of choice: marketing.

Indeed, attending industry events or receiving industry communications (I now get twice as many pitches for cannabis companies as I do for Silicon Valley startups, the previous champion) is to enter a fog of propaganda so thick that it obscures the larger questions about how this important social transformation will work.

Cannabis already seems to be reproducing all the regular facets of American commerce, with endless varieties of products of dubious necessity: cannabinoid eye drops that will treat your glaucoma, cannabis oral strips that dissolve under your tongue, hemp oil that will stop your brain seizures, cannabis creams that will make your skin glow, and several cannabis-infused items that will get you off addictive opioids.

There’s also an attempt to sell corporate architecture. I’ve been deluged with pitches for companies that claim to be “vertically integrated,” which means that they operate in the “complete ecosystem of cannabis—breeding, cultivation, extraction, packaging, and manufacturing.”

Add to this a host of other services like online marketplaces, specialized software, and—my personal favorite—PotBot, an “artificial intelligence” app that will recommend marijuana strains that show the most promise in relieving your symptoms. All these choices also create the need for companies that can simplify your marijuana shopping. A press release from Canndescent, a cultivator of “ultra-premium cannabis flower,” has adopted a “consumer-friendly, strain classification” system (Calm, Cruise, Create, Connect, and Charge).

“You shouldn’t need to bio-hack your body through a periodic table of ominous strain names like Durban Poison and Trainwreck just to buy some pot,” said the CEO in a statement.

Amid all this smoke, there are nods to some important issues—including whether the new industry is representative of California and the communities that have suffered the worst from enforcement under prohibition. I’ve been repeatedly invited to “Meet L.A.’s First Legit Latina Cannabis Entrepreneur” and been asked, rhetorically, “Did you know there’s a growing, influential Jewish community within the cannabis industry?” More seriously, Los Angeles, Oakland, and Sacramento are among the cities working on “social equity programs” to make sure that communities hurt by the drug war enjoy the benefits of jobs and investment in the newly legalized market.

But these efforts speak to the real possibility that cannabis businesses will mirror California’s inequality. Poorer communities have been more open to permitting the businesses, while wealthier places have kept them out. In effect, many places with the resources to pioneer the enforcement that shrinks the black market and protects the newly legal businesses are sitting this transition out. For example, the Independent California Kingdom known as Marin County has failed to license a single new retail dispensary or adult use shop, despite 70 percent voter support there for legalization.

This New Year’s Eve is likely to be full of high spirits, especially at the stroke of midnight when some Californians may light up for the first time. But don’t be surprised if the rest of the transition feels like a bad trip.