Will Squid Soon Rule the Oceans? 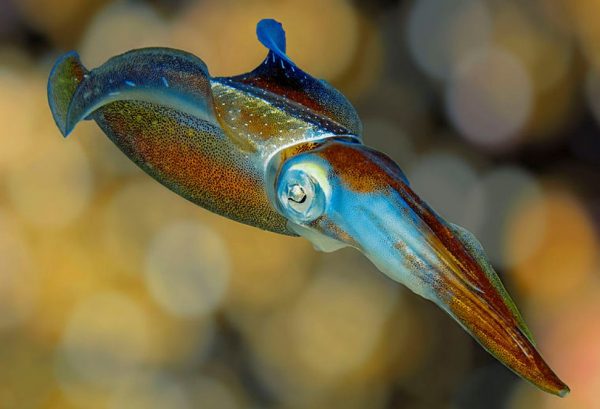 Today’s squid, with their fast growth and lack of a shell, are doing remarkably well in our changing seas. Photo courtesy of Betty Wills.

The future is full of tentacles.

Even now, both giant and colossal squid writhe throughout the deep, while hooked and flying squid migrate from sea to sea in swirling swarms. Otherworldly glass squid and jewel squid proliferate in the open ocean. And market and common squid blanket shorelines with their egg capsules and their own dying bodies.

Then, of course, there are the octopuses: giant and pygmy, intertidal and abyssal, deadly and benign. All kinds of cuttlefish, too, from the tiny and toxic flamboyant to the edible pharaoh.

Over the coming years, we’re likely to witness an even greater abundance of squid, octopuses, and cuttlefish—collectively known as cephalopods. Primed by 500 million years of evolution, these creatures seem to be thriving on contemporary environmental upheaval.

The apparent delicacy of a cephalopod’s body is deceiving. Unarmored, their skin is packed with sensitive nerves, and they’re easily damaged. They are in fact a literal delicacy: Every creature that can eat them does so (including seabirds, sharks, and seals, just to name a few). But cephalopods themselves are also resilient predators who will eagerly gobble up whatever they can grab—shrimp, snails, crabs, fish, and always, always each other. This flexibility is helping them to grow in both numbers and influence in our rapidly changing environment.

The current cephalopod expansion was documented in 2016 by a crew of scientists led by Zoë Doubleday and Bronwyn Gillanders at the University of Adelaide. They studied the catch rates of fisheries and scientific surveys around the world between 1953 and 2013, gathering data on 53 cephalopod species that include squid, octopuses, and cuttlefish from both open ocean and coastal waters. After presenting evidence of rising abundance across species and seas, the researchers suggested that the ultimate cause of these gains may be us humans.

Although climate change, overfishing, and pollution spell doom for many marine animals, squid and their relatives are poised to take advantage of such disruptions. At the core of their success lie two outstanding evolutionary innovations: that soft squishy body, and a “live fast, die young” life strategy.

When cephalopods first evolved 500 million years ago, they lived inside shells, like snails. But unlike them, they didn’t ooze along the ground. Buoyant gas inside their shells made them drifters, cruisers, and swimmers—although they could never swim very fast. Even a buoyant shell makes terribly awkward luggage.

When speedy fish evolved about 450 million years ago, they put evolutionary pressure on cephalopods to rev up too. Internalizing their cumbersome shells gave them speed, maneuverability, and flexibility to compete with (and avoid being eaten by) ever-speedier fish. Before the first dinosaur walked on land, the first squid ancestor had already begun to grow its shell inside its body, starting down the path that would eventually lead to today’s supremely squishy cephalopods. A chambered nautilus, the only living cephalopod with an external shell. Photo courtesy of Manuae.

Only one kind of living cephalopod retains that age-old external shell: the nautilus. Although its ancestors somehow managed to survive hundreds of millions of years of fish-dominated seas, the venerable nautilus shell is now a curse. Its pearly nacre and striking coloration are cherished by collectors around the globe, and over-harvesting has led to scarcity.

The internal shells of other modern cephalopods draw far less attention. Cuttlefish bear a curiously flattened cuttlebone, which bird-owners sometimes give as a calcium supplement to their pets. The squid’s shell is reduced still further to a stiff yet flexible vestige known as a pen. Meanwhile, octopuses grow only a pair of small rods like internal barrettes—and some species grow nothing at all.

Shell reduction offers a notable advantage today, as an overdose of carbon dioxide causes acidification as well as warming in the oceans. While clams and corals struggle to build their hard parts in increasingly acidic water, the boneless cephalopods seem relatively unfazed.

Another perk of a soft body is rapid growth. Soft tissue can be built much more quickly than hard shell, so most species of octopus and squid can grow up, reproduce, and die in less than a year. Even the lifespans of the largest species are estimated at little more than five years.

Fast growth and early reproduction are keys to success in a variable environment. Ocean conditions can change rapidly: Currents shift, bringing warmer or colder water; weather systems move in and out; algae bloom and then die off. Some changes follow regular cycles, but many are difficult or impossible to predict, and human impacts are making them even more unpredictable—as in the case of climate change intensifying and rearranging tropical storms.

Your typical cephalopod is well-suited to handle such environmental mood swings. Growing quickly allows them to take advantage of boom times, while frequent production of abundant babies helps to hedge their bets during a bust.

That’s what Humboldt squid seem to be doing in Mexico’s Gulf of California. In times of abundant food, the animals take a year or more to grow up to five feet long before they start pumping out babies. But when good food is hard to come by, as in the case of the 2010 El Niño, they reach sexual maturity in just six months, when they are merely six inches long.

A five-foot female squid can produce millions of eggs. A half-footer produces far less—but “less” could still mean thousands. Humboldt squid, like many other cephalopods, produce staggering loads of offspring even on their “off” generations. Although many drift into bad water or the jaws of predators, only a few need survive.

And if more than a few survive?

What if our changes to the ocean are such a boon to cephalopods that we witness a global explosion of tentacles? We might have to shift our menus from tuna salad to octopus salad, from swordfish steaks to squid steaks. Furthermore, as cephalopod populations respond to a mercurial environment with their own wild fluctuations, we may have to accept a variable availability of seafood: Sometimes we’ll have it, and sometimes we just won’t.

Being generalist predators, cephalopods also have the potential to clean out whole swathes of ocean. A proliferation of hungry squid could eat its way through the available prey, leaving little for other predators—or for their own offspring. Mobile and adaptable as they are, the next generation of squid might simply find new hunting grounds to ravage.

So far, so good for squid. But squid are not the only cephalopods, and they have cousins who don’t share their superpowers. Pearly nautiluses, last of the shell-dwelling cephalopods, grow slowly and have few babies. Already severely depleted in many places, they have recently gained protection by international treaty in 2016 and consideration for the Endangered Species Act in 2017.

Several species of deep-sea octopuses, which evolved to have the characteristics of slow growth and few offspring, are already listed as endangered. Although not targeted in themselves, these creatures have the misfortune of living in close quarters with delicious neighbors. Fishing nets aimed at scampi shrimp often catch octopuses as well, and any death—accidental or not—is a significant loss.

Despite the resilience of squid and their appearance as tentacled aquatic weeds, it’s unlikely that they will be totally immune to overfishing. When humans find an animal that we like to eat or look at, we’re incredibly good at taking and taking until there aren’t any left. What if squid and octopuses were extinguished or drastically reduced by our own short-sightedness? A major source of protein for people, along with every other large marine predator, would disappear.

Such a scenario is unlikely, but there are hints that even the softest of bodies are not wholly protected against the complex effects of climate change and ocean acidification. Although they lack a shell, squid and octopuses all have a kind of “inner ear” containing a tiny hard stone that helps them to balance and orient themselves. (Humans have similar tiny crystals in our inner ears.) But in the ocean, acidification could affect the formation of these stones—a minuscule change with potentially far-reaching effects.

A squid with misshapen balancing stones would struggle to swim properly. Many such squid, wandering disoriented, might strand themselves on beaches or tumble into the deep. In the face of our current cephalopod boom, let us remember that this too is a possibility: seas of lost squid.

Danna Staaf is a freelance science writer with a PhD in marine biology. She is the author of Squid Empire: The Rise and Fall of the Cephalopods and blogs at The Cephalopodiatrist.